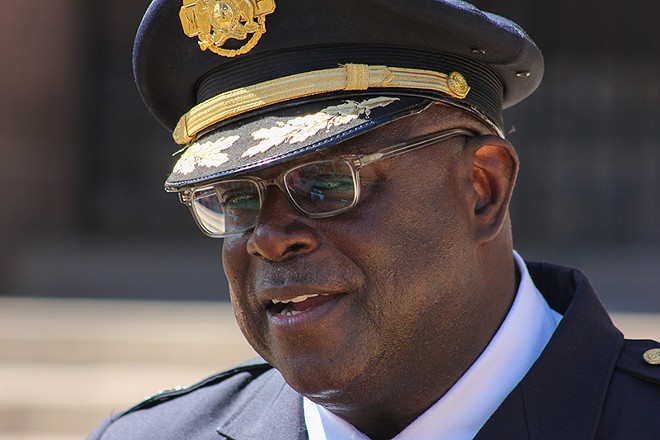 Four years after taking the helm of the St. Louis Metropolitan Police Department, Chief John Hayden announced Wednesday that he will retire in February — a decision that's now thrust the city, and its new mayor, into a familiar set of circumstances.

In 2017, it was a different newly elected mayor, Lyda Krewson, launching a national search to replace then-Chief Sam Dotson, who had conveniently announced his resignation after meeting with Krewson on her first full day on the job. The circumstances strongly suggested the new mayor had leaned on the chief to leave or be fired.

That's not how Hayden is going out. During a press conference Wednesday, Mayor Tishaura Jones praised Hayden for "his willingness to work across administrations" and said he had acted as "an ally in our efforts to reimagine and improve public safety."

Still, Jones admitted that she had been "a little bit" surprised when Hayden told her that he would retire on the day of his 35th anniversary in the department on February 23, 2022.

The search for a replacement begins immediately, Jones said, and will include candidates both from within the department and far outside it.

"We will look nationwide, as well as locally, for our next police chief," she continued. "They will have to be forward thinking and ready to collaborate with communities across the city and across this region. They will guide officers to focus on violent crimes and partner with community members to ensure responsive community policing and engagement efforts."

Under Hayden, Jones' administration touted the launch of a "Cops and Clinicians" program that diverts emergency calls related to mental health issues to behavioral health professionals instead of police.

The ideal chief would continue those policies, Jones said, and also work to identify policing issues that could be "better solved with behavioral health and civilian intervention."

Jones said her administration would engage in two listening sessions in October, while a survey available on the city's website will collect suggestions from residents before an as-yet-to-be scheduled town hall.

The process is broadly similar to the effort Krewson launched before landing on Hayden in 2017, choosing the veteran commander of the city's North Patrol division. The search had similarly featured a town hall, where six candidates faced a crowd of community members with questions about how they would police St. Louis.

The town hall was also attended by protesters who repeatedly shouted down Lt. Colonel Lawrence O'Toole, the then-interim St. Louis police chief who led the department's response to protests that summer. His officers had arrested hundreds of people during demonstrations, leading to dozens of lawsuits and even criminal charges against a group of white officers who had brutally beaten a Black undercover cop they thought was a protester. (In 2020, O'Toole filed a discrimination complaint alleging he was passed over for the permanent role as chief because he is white.)

Although Hayden had not been chief during the 2017 protests, he had worked the streets as a commander and presided over protest details at the time.

Asked during the press conference what lessons he drew from the challenges he faced as chief in 2017 after O'Toole, Hayden responded by pointing out that, unlike his predecessor, his officers' conduct during the last four years had not sparked any national outrage or a stream of lawsuits.

"It's about accountability," he added. "I think we’ve learned that. I think that, to the people in my administration, [they know] that was very important to me, and I think it shows."

Picking a new chief can be messy business, and it's no small boon to St. Louis that Hayden appears to be leaving on good terms. Meanwhile, in St. Louis County, the fight over the role of police chief triggered an explosive discrimination lawsuit from a prospective candidate, Lt. Col. Troy Doyle, who alleged earlier this year that County Executive Sam Page blocked his elevation to chief because he is Black.

In July, the candidate who did get the job in the county, Mary Barton, tendered her own resignation after serving just fifteen months as chief. She's filed a discrimination complaint of her own.

As for Hayden, he appeared at Wednesday's press conference alongside Jones and Public Safety Director (and former St. Louis police chief) Dan Isom.

Hayden called his four years as chief "an honor of a lifetime."

Referring to Jones and Isom, he said, "I want them to know that I'm extremely appreciative of them allowing me to be a part of this administration. This decision was carefully and prayerfully considered by myself and my family. We all believe that it is time for me to pass the proverbial torch."