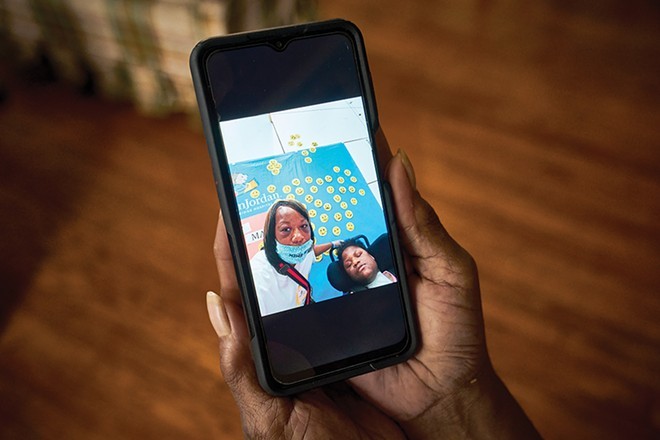 THEO WELLING
Chuny Ann Reed's mother, Carolyn Reed, shows a photo of her daughter. The late Chuny Ann Reed was herself the mother of four, one of whom was severely disabled.

Reed was awaiting trial in St. Louis on a federal charge of distributing fentanyl and crack cocaine resulting in bodily injury at the Parkview Apartments, 4451 Forest Park Avenue. If convicted, she would have faced at least 20 years in prison.

Fentanyl, a powerful synthetic opioid painkiller, had somehow contaminated the crack cocaine Reed had allegedly sold out of her apartment on Parkview’s 14th floor, causing 11 people to overdose. Eight of them died between Feb. 5 and 7 of this year at Parkview and neighboring Park Place Apartments — the second deadliest mass opioid overdose in U.S. history and the subject of a recent RFT cover story.

The mother of four children, Reed had a long history of drug use and interaction with the criminal justice system. Family members say she dealt to support her own heroin habit. She was not charged with causing any of the deaths at either Parkview or Park Place.

Diane Dragan, Reed’s federal public defender, confirmed her client’s death Monday, but otherwise declined comment. Robert Patrick, a spokesman for the U.S. Attorney’s office of Eastern Missouri, declined to comment on Reed’s passing or how it will affect the charges against her.

“In general, if a defendant dies with a case pending, that case would be dismissed when documents confirming the death are received and filed in court,” Patrick wrote in an email to the RFT.

Reed had been in federal custody at the Tri-County Justice and Detention Center, in Ullin, Illinois, since her arrest in early February. She suddenly took ill last Wednesday evening — the same day the RFT published its story about her case.

Reed suffered a “medical episode” on July 13 that “has drastically impacted her health and substantially changed her public safety risk factors,” Dragan wrote in a motion two days later. Dragan’s motion, filed July 15, made no mention of the nature of the medical episode.

On the same day, U.S. Magistrate Judge Patricia Cohen agreed to release Reed on bond, under the condition that she report to her assigned court within 72 hours of being released from the hospital, according to Cohen’s order.

By Sunday morning, however, Reed was in a coma and breathing with the help of a ventilator in an Illinois hospital, according to family friend Shirley Jordan.

Federal authorities are refusing to disclose to family members the cause of Reed’s death, which is why Jordan is calling for an autopsy to be performed. Jordan says Reed was in good health up until Wednesday night. Yet, suddenly, Reed fell into a coma three days later.

“We don’t know anything,” Jordan says. “It doesn’t make sense. She’s not a person who’s fresh to jail.”