So apparently George Brett doesn't like it when people take shots at the Royals manager. Who knew?
Oh, and he hates sportswriters and media people pretty much just in general. Sort of makes me glad I'm over on this side of the state, you know? Tough to feel good about yourself when a Hall of Famer thinks you're a waste of carbon.
At a charity golf tournament the other day, Brett was asked about the criticism that
click to enlarge 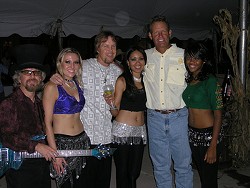 liquidbluetour.com
Let it never be said that George Brett doesn't know how to party.
Of course, Brett then got a bunch of criticism from various media people out in KC, and that's probably fair. He is, after all, an employee of the Royals, so anything he says, even while on the golf course (and, let's be honest, he had probably had a couple anyway), sort of represents the organization. Okay. I get it. He probably should have shown a little bit more restraint. Me, though, I would kill to see Ozzie Smith or Lou Brock just blow up all over someone. To hell with respect and class, I want crazy!
Jim Hayes- "Hey, Lou, what do you think about how little running there is in the game today?"
Lou Brock- "Fuck them and fuck you!"
What's even crazier about this whole thing, though, is that Jason Whitlock, hack provocateur extraordinaire, then wrote a column about the whole thing that actually made some really good points. To be honest, the whole ordeal has left me on rather shaky footing, to say the least.