Yay, We Can Read! St. Louis is the Nation's Eighth Most Literate City 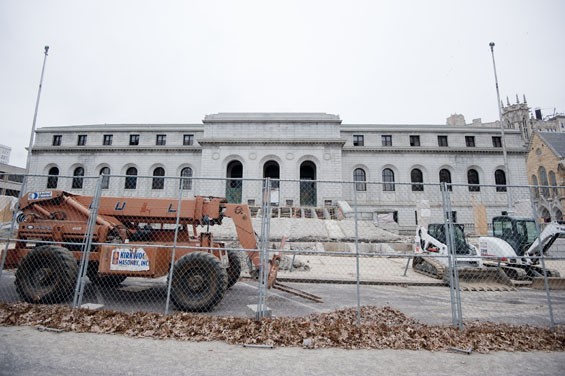 Kholood Eid
One of the reasons we're number eight.

It's that time of year again, the only time of year when anybody outside New Britain, Connecticut, pays any attention to Central Connecticut State University. This morning the college released its annual ranking of the Nation's Most Literate Cities, and the results are heartening: St. Louisans may not be the richest or the best-educated citizens in this fair land, but we live in the U.S.'s eighth most literate city. Last year we were ninth. See? Progress! And, oh yeah, there were 75 cities in the rankings.

St. Louis, according to the data, has the fifth-highest newspaper circulation, publishes the ninth-highest number of magazines and journals and is tied for the seventh highest number of bookstores per 10,000 people. And, aside from Cleveland, St. Louis has the most extensive library system in the country. (It's unclear, however, whether the survey included the County Library and the Municipal Library Consortium, or if it confined itself to the city library.)

St. Louis, however, is a decidedly old-school kind of town, as demonstrated by our number 20 ranking for Internet usage. ("Internet usage" encompasses Internet book orders, number of e-readers per household and unique hits to the Web version of the city's newspaper -- again, it was unclear which newspaper, though we're betting on the Post-Dispatch.)

And we don't seem to need no education, either: We ranked 45th for percentage of residents with high-school diplomas and bachelor degrees. (Interestingly, in that category we tied with Arlington, Texas, home of the Rangers.)

This year, for the first time, the researchers examined the relationship between a city's wealth and literacy level. "Using US Census data for income in the relevant cities," writes lead researcher and college president Jack Miller, "I learned that wealthier cites are no more likely to rank highly in literacy than poorer cities....While poverty has a strong impact on educational attainment, its impact on literacy is much weaker."

That's comforting, we suppose, since, in terms of wealth, St. Louis ranked 70th out of 75 cities. See? We're poor, but we read! Although it can also be argued that reading is the cheapest form of entertainment -- aside from sex, which would explain some of our other rankings.

For the record, Washington, DC, is the most literate city this year and Bakersfield, California, is the least.