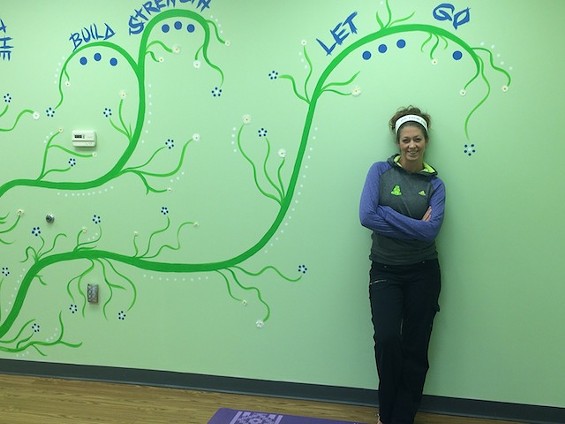 Mitch Ryals
OM Turtle Yoga in Florissant opened one year ago, and owners hope to add a second location in Ferguson by December.

As anticipation in Ferguson mounts, maybe the town could use a little yoga.

Angie Carron wants to be the one to bring it there.

The fifteen-year Florissant resident and owner of OM Turtle Yoga recently signed a lease for a second studio, an 1,100-square-foot space down the road from the Ferguson police station.

"Everyone is like, 'Why Ferguson? Why now?'" Carron says. "But truly, why not Ferguson right now? We all need to find our center, our peace, our balance, and I think this is a better time than any to bring our studio to Ferguson."

But it's not unreasonable to think opening a storefront in Ferguson is a risk. Protesters have threatened other nearby businesses, and more demonstrations are likely if Darren Wilson, the Ferguson police officer who fatally shot eighteen-year-old Michael Brown, is not charged with a crime.

Andy Wurm's Tire and Wheel, directly across from Ferguson's police headquarters, offers one example. Although the majority of protesters cooperated a couple months ago when Wurm asked them to move off his lot, he says he received some threats of bricks going through his windows.

Faraci Pizza, a few blocks from the police station on South Florissant Avenue, has also been a target. Protesters who claimed to see the owner point a gun at them threatened to shut the restaurant down. The family that owns Faraci said they've lost a lot of business since August because people are afraid to come into Ferguson at night.

All the more reason to open a yoga studio, Carron says.

When she signed the lease for the Ferguson space, the former Express Scripts employee walked away from a six-figure salary, benefits and a 401K, deciding to focus her energy on operating the two studios full time.

"It truly is a mission," she says of her passion to help her students in the same way yoga has helped her. "I am blessed to work with all these people on a daily basis, and I want to bring that to Ferguson."

Before she decided to open a second studio, Carron's morning commute to Express Scripts took her down South Florissant Avenue past protesters and signs and boarded-up windows.

"There's a lot of passionate people in that town that want to see it grow," she says. "It just feels like yoga would be a good fit for helping the town rebuild."

She plans to open her second yoga studio location in early December.