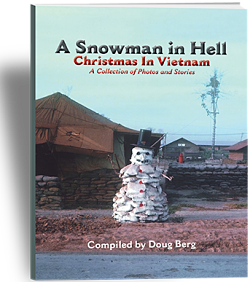 You have seen almost all these books on the bestseller list before. Which makes sense: When you're giving a gift, you want to go with the tried and true. (Is there anyone in St. Louis who doesn't love Tony La Russa, beer and Gone Girl?) But may we politely direct your attention to a few newcomers on the adult list this week? First, Stephen Colbert's America Again: Re-becoming the Greatness We Never Weren't. And local author Sharon Shinn's Still Life with Shape Shifter, the second volume in her Shifting Circle series. (And, OK, we may as well admit, for us Shinn is tried and true, also; she's long been a favorite of ours.)

And finally A Snowman in Hell: Christmas in Vietnam, a collection of photos and veterans' reminiscences of Christmas in Vietnam, compiled and self-published by Doug Berg, who was also there. The book chronicles the soldiers' attempts to celebrate Christmas in the middle of a terrible war, from building a snowman out of sandbags to dressing up like Santa and distributing presents to Vietnamese orphans.

1. One Last Strike: Fifty Years in Baseball, Ten and a Half Games Back, and One Final Championship Season by Tony La Russa 2. Bitter Brew: The Rise and Fall of Anheuser-Busch and America's Kings of Beer by William Knoedelseder 3. Thomas Jefferson: The Art of Power by Jon Meacham 4. Gone Girl by Gillian Flynn 5. Still Life with Shape Shifter by Sharon Shinn 6. Never Hug a Nun by Kevin Killeen 7. St. Charles Then & Now by Vicki Berger Erwin and Jessica Dreyer 8. America Again: Re-becoming the Greatness We Never Weren't by Stephen Colbert 9. A Snowman in Hell: Christmas in Vietnam: A Collection of Photos and Stories compiled by Doug Berg 10. I Could Pee on This: And Other Poems by Cats by Francesco Marciuliano

1. Count to Sleep St Louis by Adam Gamble and Joe Veno 2. Diary of a Wimpy Kid: The Third Wheel by Jeff Kinney 3. I Want My Hat Back by Jon Klassen 4. Goblin Secrets by William Alexander 5. Elemental by Antony John 6. Safari: A Photicular Book by Dan Kainen and Carol Kaufmann 7. Where the Sidewalk Ends by Shel Silverstein 8. How Do Dinosaurs Say Merry Christmas? by Jane Yolen and Mark Teague 9. The Elf on the Shelf by Carol Aebersold 10. Olivia and the Fairy Princesses by Ian Falconer