The pole-positioning of this sequence and its reprise later in the film strongly indicate the centrality of those 1960 events in Saint Laurent's life: The implication is that they reverberate through the years, influencing (and explaining) all that follows, especially his persistent depression and copious drug use.

And perhaps they do — Saint Laurent apparently believed that was the case — but the film proves too willfully allusive to draw such straightforward conclusions. Bonello wants to explore rather than explicate, and Saint Laurent remains maddeningly opaque throughout: He's so self-obsessed and inward-looking that he's essentially unknowable. Avoiding pat psychological explanations is admirable, but Bonello's approach keeps us at an empathetic remove, and we never much care what happens to the film's supposed protagonist. The fate of his dog proves far more consequential and moving. 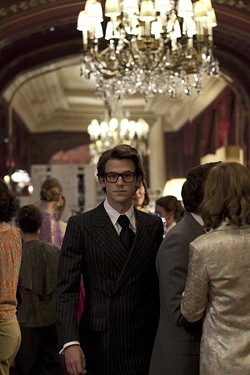 Saint Laurent is far from a traditional biopic — it's primarily confined to ten years, 1967 to 1976, of its subject's life — and Bonello provides minimal information about the designer's personal or professional background before or after the period that the film covers. Instead of sampling key moments from Saint Laurent's full 71 years — like a stone skipping across the water's surface — the film opts to sound only the most pressurized depths, as the designer simultaneously plunges into hedonism and creates some his most iconic collections. Eventually, in its final third, the movie interpolates sequences set in 1989, and these glimpses of a 53-year-old Saint Laurent (played by Helmut Berger) show the sad physical and mental effects of his dissolute youth: Befogged and prematurely aged (Berger is in his early seventies), he seems adrift, isolated, haunted.

The decadence on abundant display in Saint Laurent would appear to promise some transgressive thrills, but by emphasizing the scene's repetitiveness, Bonello denies us much pleasure in that regard; never has having fun seemed so glum. In fact, the most fascinating aspect of the film is an early documentary-style sequence in Saint Laurent's atelier, as his seamstresses and assistants go about the difficult task of translating his designs into actual garments. Similarly, a lengthy scene in which Bergé negotiates with a representative (Brady Corbet) from the firm's American partner is far more compelling than the putatively more sensationalistic material.

Saint Laurent is undeniably sophisticated, and there's much to admire in Bonello's elegant direction, but there remains a hollowness at its core. Even fashionistas, who will likely find the film irresistible, might be disappointed with Bonello's apparently ambivalent view of the movie's subject: Using split screen, he counterpoints Saint Laurent's collections with contemporaneous world events (e.g, the 1968 Paris riots, Vietnam), underscoring fashion's essential irrelevance.

Cliff Froehlich is executive director of Cinema St. Louis, which presents the St. Louis Filmmakers Showcase from July 19 to 23.