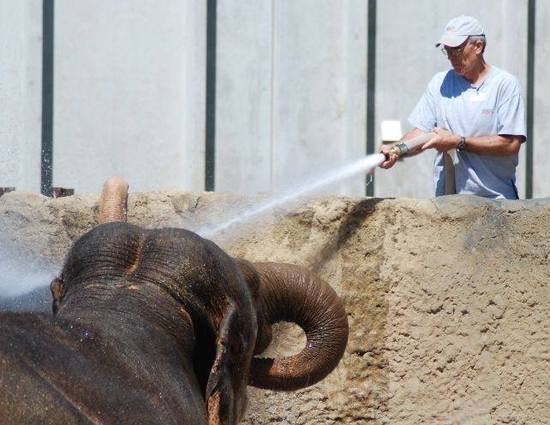 John Bradford, 62, worked as a zookeeper for more than 30 years at the Dickerson Park Zoo in Springfield. On Friday morning "Patience," a female, 41-year-old, 6,000-pound Asian elephant, crushed him against the ground, killing him instantly.

The incident only took seconds. Zoo officials say that Bradford was trying to coax Patience through a narrow corridor, or shoot, that leads from the elephant barn to the yard, when the elephant suddenly lunged forward, knocking Bradford into the shoot and fatally trampling him.

"He was an extremely well-trained animal handler," spokeswoman Cora Scott says of Bradford. Since Bradford's death, the Dickerson Zoo's Facebook page has become an ad-hoc memorial for the veteran zookeeper, with many posting pictures of the man along with their condolences.

The story is tragic enough as is, but Bradford's death is the second painful loss the zoo has endured this month: Last Friday Pinky, the 50-year-old matriarch of the zoo's elephant herd, died from kidney failure.

In fact, zookeepers had noticed Patience acting oddly hesitant and submissive in the time following Pinky's death, and were monitoring her closely.

A press release states that, in accordance with safety guidelines, Bradford had been accompanied by two other zookeepers while he was moving Patience through the shoot. Neither of the other zookeepers were injured during the incident.

The Springfield Police Department arrived on the scene to conduct an initial investigation, and Scott says more scrutiny will come from other city agencies as well as the Association of Zoos and Aquariums (AZA) Accreditation Commission. 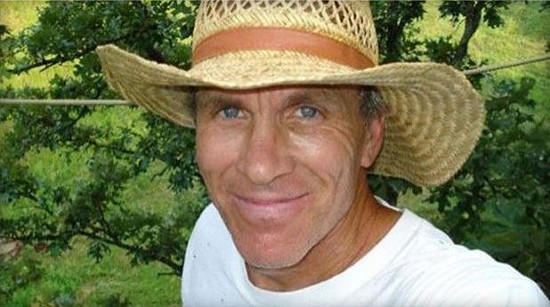 Never one to sit silent when animal-related tragedy strikes, PETA released a statement over the weekend demanding Dickerson Zoo "close its elephant exhibit and send Patience and the three other remaining elephants to a reputable sanctuary."

Here's a clip from a KY3 news story shot last April that features Patience, who appears docile and even playful. (The zookeeper shown in the video is not John Bradford.)

Here's the release the Dickerson Zoo sent out on Friday, soon after Bradford's death.

At the time of the incident, approximately 8:45 a.m., zookeepers were in the elephant barn, moving a 41-year-old female elephant, Patience, from the barn stalls into a chute.

The chute functions as a corridor connecting the barn to the yard. The chute is about 12 feet long, with adjustable walls which can made wide or be narrow. A narrow chute is useful for zookeepers to hold the animal when performing an inspection, which takes place at least twice a day. The chute's walls are made of 6-inch round metal bars, about 10 feet tall, spaced about 15 inches apart -- wide enough for a human to walk through, but narrow enough to restrain an elephant.

Elephants are moved through the chute several times a day, and zookeepers reported there was nothing unusual about this particular movement from the barn.

Zookeepers reported that Patience's behavior had been hesitant and submissive since the Oct. 4 death of Connie (Pinky), the elephant herd's matriarch. They were watching her carefully, because of this behavior. Three zookeepers were present; a minimum of two zookeepers are required to be present when approaching the protective barrier.

The morning of the incident, Patience hesitated in the chute, and elephant manager John Phillip Bradford, 62, was coaxing her forward. Bradford leaned into the chute, reaching for her with a guide. The animal suddenly lunged forward, knocking Bradford down, into the chute. The animal then crushed Bradford against the floor, killing him instantly.

The other zookeepers moved quickly to pull the animal away from Bradford. The whole incident took place in a matter of seconds.

Bradford's actions were consistent with zoo policies and AZA Guidelines for Elephant Management and Care.

The Springfield Police Department was onsite immediately after the incident and conducted an initial investigation. When finalized their report will be made available to the City's internal investigation team, which will include Parks Administration, Dickerson Park Zoo Management, City Safety staff from the Human Resources Department, and any additional resources needed. In addition to the City's internal investigation, there will be other investigations by appropriate oversight agencies, including the Association of Zoos and Aquariums (AZA) Accreditation Commission.

Dickerson Park Zoo is internationally recognized for its elephant program. The zoo is the recipient of the 1997 Edward H. Bean Award from the Association of Zoos and Aquariums, honoring the zoo's elephant breeding program.

The combined events of losing the elephant herd's matriarch, Connie (Pinky) to kidney disease Oct. 4, and now the death of elephant manager John Bradford, have had a tremendous impact upon the zoo staff. Zoo officials respectfully request privacy of staff members, friends and family.