Floyd Irons, the former basketball coach at Vashon High School, has an 11 a.m. hearing in U.S. District Court in downtown St. Louis today at which he is expected to plead guilty to charges of wire and mail fraud in connection with a real estate venture. 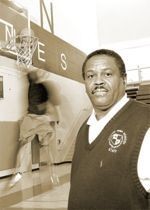 Better days: Floyd Irons coached Vashon's basketball squad for three decades and in 2004 was inducted into the Missouri Sports Hall of Fame
A co-defendant in the case, St. Louis mortgage broker John Mineo Jr., will also be waiving an indictment, at 11:30 a.m., and pleading guilty to similar charges, in front of District Court Judge Richard Webber.

Riverfront Times last reported in May on the ongoing investigation of Irons.