As an alumnus of the University of Washington and rabid Huskies football fan, I was a little shocked and saddened when I went online yesterday to read the Seattle Times. The paper is running an investigative series this week that probes UW’s tolerance for the behavior of players on the 2000-’01 football team. (That’d be the last great Huskies squad, which defeated Purdue in the Rose Bowl and finished the season ranked third in the nation.)

The series digs up dirt on some already loathed athletic department officials, including Rick Neuheisal, recently hired as head coach at UCLA, and former athletic director Barbara Hedges, who many fans and alumni believe ran the program into the ground. Essentially the Times points out several instances where the athletic department covered up and let slide some strikingly awful deeds committed by its football players.

The story also has a noteworthy, if tangential, local tie. St. Louis Rams head coach Scott Linehan was an offensive coordinator at Washington from 1996 to 1998. The first installment of the series probes the various crimes and misdemeanors of Jerramy Stevens, the team’s star tight end, who went on to play for the Seattle Seahawks and Tampa Bay Buccaneers in the NFL. The headline: "Convicted of assault and accused of rape, star player received raft of second chances." 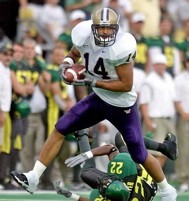 Jerramy Stevens as a Husky and second-team All-American.
Via records requests, Times reporters unearthed this letter Linehan wrote to the Thurston County prosecutor in support of Stevens. The precipitating incident: A friend of Stevens’ hit another student in the face with a baseball bat, and Stevens proceeded to “jump up and stomp on his face” while his victim was unconscious. Stevens was a senior in high school at the time, already signed to play for UW.

Here’s the money quote from Linehan, who would leave UW for the head coaching job at Louisville before Stevens played a down under his tutelage:

“We believe this to be an isolated incident. Under our discipline and supervision I believe Jerramy will show this to be true.”

Jerramy did no such thing. In fact, over the next nine years he’d go on to be convicted of drinking and driving three times, not to mention two hit-and-run accidents, including one in which he drove his SUV through the wall of a nursing home, knocking a dresser onto a bed where 92 year-old woman was sleeping.

Much of the Times story focuses on the allegation that in August of 2000 Stevens drugged and anally raped a UW freshman in a frat-house alley. An eyewitness and the woman’s friends told prosecutors that she appeared to have been drugged, and the DNA in a semen sample taken during a sexual-assault exam the day after the incident matched Stevens’. But prosecutors said there was insufficient evidence to file charges, noting that the exam took place too late to test the woman for drugs. The woman sued Stevens and the university in civil court; the matter was settled and terms were not disclosed.

I called the Rams’ media department for a comment from Linehan. I’ll post an update when I hear back.