For Cardinals, June is Getting Tougher

Now we'll see just how tough this team really is.

It looks like Albert Pujols is definitely going on the fifteen-day Disabled List. What exactly this means for the Cardinals' season remains to be seen. All this year, we've witnessed this team, supposedly outclassed by plenty of other teams, play solid, winning baseball. Even with the ace of the staff not having thrown a single pitch for this team, they've won. We saw the closer self-destruct and be sent down to the minors to try and right the ship. Oh yeah, he had some kind of hand thing. Well, obviously that's why he was sent down... 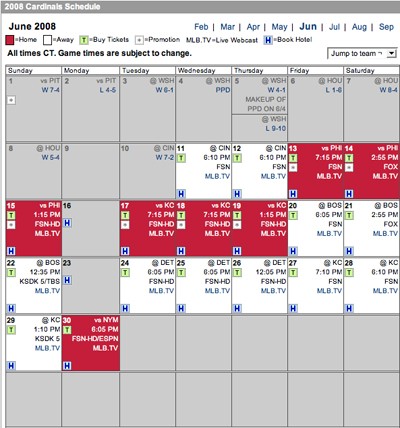 The Cardinals have seven home games and eleven road games left in the month of June.

Still, with all that's happened, the Cards have kept on winning. Unfortunately, that may all be about to change. Adam Wainwright, the de facto ace of the team, is out for at least three weeks. Pujols is out for at least a couple of weeks himself. The two biggest guns on the team, injured within three days of each other.

I don't know that the cavalry is coming, folks. Chris Carpenter is still quite a ways off, projected to return sometime shortly before the All-Star break. Matt Clement struggled in his last rehab outing at Double A Springfield. Mark Mulder, I don't even want to talk about. So I don't think the pitching is going to suddenly improve by leaps and bounds due to the return of some big arms.

The offense? No help on the horizon there. The club's move to plug Albert's spot on the roster was to call up Chris Duncan from Triple A. Unfortunately, Duncan isn't exactly terrorizing the pitchers in the Pacific Coast League, currently hitting under .200. His full line as of this moment: 21 at-bats, .190/.346/.286 (average/on-base percentage/slugging percentage). That's right, his slugging percentage is less than .300. Somehow I doubt that Duncan is going to come up and just give this team the run-producing presence they need to make up for the loss of Albert Pujols.

Any hitters on the farm that look to be ready? Sadly, no; we've already got most of them up here. Colby ''Second-Coming'' Rasmus is just now beginning to improve after a horrific May that saw his average slip well below .200 and his power virtually disappear. Even if he were tearing the cover off of the ball, Rasmus is still an outfielder. Last I checked, outfield isn't the problem with this team. Of course, the Cards could always just leave Duncan in Memphis, bring up Rasmus to see what he's got, and play Mather at first, but I doubt that's going to happen, nor do I necessarily think it should. Mather is still struggling to adjust to major league pitching. It's certainly not out of the question that he could help plug the hole at first base, but I don't think he's exactly the answer that we're all looking for right now.

So, what does that leave? Well, to be perfectly, brutally honest, nothing. The Cardinals simply don't have any good options to try and fill in for Albert until he comes back. The rotation should at least hold up, with Joel Pineiro coming off the DL and Todd Wellemeyer slotted to start this weekend, but the offense isn't going to be quite so lucky. Whatever the Cardinals end up doing over the next few weeks while they wait for their newly injured guns to heal, they're going to have to do it with players who are already here.

So far this season, we've seen the Baby Birds make much greater contributions than I think a lot of us expected to see. Now, though, we're going to see just how good the kids are. The rest of June was already going to be a very tough road. I can't imagine how tough it's going to be now that the Cardinals' are without their two best bullets.

Good luck, boys. You're going to need it.

Jump to comments
« Google Maps' Street View Has Arrive…  |  For Cardinals, June is Getting Toug… »