“Dude, dude, I'm begging you, please don't use my photo. It will steal my soul,” pleads a nervous gentleman with the rat-tail hair and the partial platinum grill.

Ahh, that's when you know it's going to be a fun weekend at That '80s Club and London Calling. Both club nights are the love children of Doug Curtis, also known as DJ Clockwork, founder of Clockwork Productions. These club nights may be sisters, but they're certainly not twins. That '80s Club is the older, preppy, popular, wine-cooler guzzling sister, while London Calling is the black-sheep sibling who scowls for the duration of the family pork-steak BBQ because she's newly vegan.

That '80s Club, a year older than it's unruly sister, celebrated it's third birthday on Friday the 13th at Rue 13 (cue the Twilight Zone theme) with cake and merriment. On Saturday the 14th , London Calling at the Upstairs Lounge on South Grand hosted a pre-show/CD release celebration for Ladytron. A few lucky club goers won tickets to see the electro darlings at the Pageant, while everyone else got a download card for a free track from Ladytron's new album, Velocifero. Now that the facts are out of the way, let's get to the dirty details; are either of these clubs worth your precious time? Could you swing both ways and do both?

Let's break it down, That '80s Club vs. London Calling:

The Patrons: At '80s Club, adult children run the risk of running into their parents. Then there's that awkward moment when you both find out how much the other drinks. Aside from the West County thirty-somethings with a fondness for bleaching hair and teeth (we'll call them “Chip” and “Debbie”), '80s Club is full of down-to-earth, fun-loving folk who need the video fix. DJ Clockwork talked about his favorite club-goer, a soldier who was shipping out to Iraq the following day. He requested, “Everybody Wants To Rule the World,” by Tears For Fears. As the soldier, filled with joy, danced alone on the floor, Clockwork reflected on the man's future, “I felt so lucky to share in that moment with him, and hope he is doing well.” It's that type of love you'll feel at '80s Club every Friday. 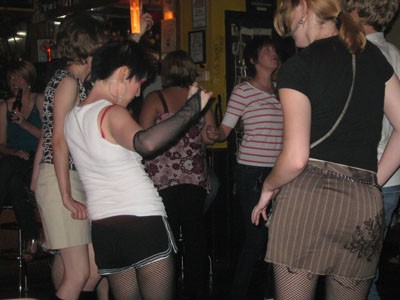 London Calling is a bit like the Island of Misfit Toys. You'll encounter nerds, pin-up girls, indie kids, Anglophiles, techno junkies, fashionistas, wallflowers, punks, hipsters and everything the cat dragged in. Here you can bum smokes from lesbians, gays, straights, asexuals and undecideds. If you're looking for a new keyboard player or just need material for your sociology paper, you've come to the right place.

The Fashion: For '80s Club, if you have a polo (popped collar optional) and a pair of light denim jeans, then you're set. One notable fashion plate was the guy sporting head to toe Dolce and Gabbana gear. We get it, Champ, you may have some money.

London Calling is held in an uber cool attic- type space above Mekong. Creepy Jesus pictures behind the bar silently forgive you for ordering that pricey Redbull-and-vodka, even though you can't afford rent. Get there early to snag a cozy red vinyl booth, or prepare to dance all night. Ladies, listen up, unless you want an audience, use the restroom downstairs. “You're welcome,” in advance.

The Vibe: As you get older you seem to lose more inhibitions. This point was proven at '80s Club, where a combination of low-carb beer and mid-life desperation caused a guy to jump barefoot from atop a booth in an attempt to impress his buds. It totally worked. '80s Club is great because, much like MTV in the 1980s, they play music videos. Let's be honest, though, some of those '80s videos will make you gag, for sure. A few videos that DJ Clockwork wanted to snuff out were: Journey's “Separate Ways” and “Your Love,” by Outfield.

The scene at London Calling is desolate until “poof!” it's midnight and the dance floor pounds with the sounds of electro-pop and you witness the best moves since Napoleon Dynamite. When asked to name his most “danceable” song, DJ Robotrock (named after a Daft Punk song) responded like a true politician, “the one [song] that the majority of the “cool kid dancers” are into. I am their slave. If they don't dance, I suck.”

The Drink: It's called the “Tootsiepop.” At '80s Club you'll want to try this signature shot of orange soda and chocolate vodka; it's like, totally yummy!

Over at London Calling, cans of PBR rule the room. Why? It's cheap and you need to save money to buy European footwear, that's why.

The Tip: Tip! That's right, if you want to hear your fave jam, then tip the DJ. Saying “please” also scores you points because, “you”ll catch more flies with honey but money helps, too!”

The Verdict: Stock up on eyeliner and go.