In the 2005 cinematic masterpiece The Ringer, Johnny Knoxville plays a regular-guy jackass who tries to rig the Special Olympics by posing as a mentally disabled participant. Any movie made in such monumentally bad taste is right up Unreal's alley. That's why when both the RFT softball squad and its opponent, Grady's Bar, each debuted its own ringer last night, Unreal was delighted to see them do their best to re-enact the Knoxville classic. 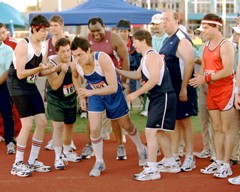 But while it appeared at times that the game was in fact turning out to be that kind of special -- a Grady's player was sporting golf shoes on the softball diamond, and RFTers were tripping over first base as if it were a high hurdle -- in the end the RFT won 7-6 in extra innings thanks to some help from their ringer, a fill-in left fielder named Greg who was on loan from Chevy's Fresh Mex.

After a perfunctory RFT top of the first, Grady's jumped out to an early lead when a strapping left-handed slugger sporting a Lindenwood College Baseball T-shirt (who'd been conspicuously absent from earlier Grady's contests) swatted a home run in the bottom of the frame. Grady's tacked on a few more in the early innings, belting balls down the left-field line and blooping base hits up the middle. Meanwhile, their veteran hurler was stymieing the alt-weekly's offense with precisely located, high-arcing pitches.

Like a champion Special Olympics sprinter, however, the RFTers showed a strong kick as they approached the finish line.

With Greg filling in in left-center field, Tom Kavanaugh was free to roam the entire left side of the diamond at shortstop and head up an air-tight RFT defense through the late innings. At the plate, the good guys dinked and dunked a run here and a run there, notching clutch tallies on a swinging bunt from hustling second basewoman Kelsey Kellison, a sacrifice fly and a Kavanaugh base hit.

The score was knotted at 6-6 after seven, so the game went to extra innings. With a light breeze blowing in from right in the top of the ninth, Greg stepped to the plate and ripped a line drive to the opposite field. The RFT's ringer then made a base-running decision that not even Knoxville would have attempted: He stretched the single to a double and then, after a slight overthrow from right field, he attempted to advance to third, whereupon he found himself caught in a pickle. Amazingly, he managed to escape the rundown by diving headfirst into third base. RFT third sacker Keegan Hamilton promptly knocked in the go-ahead run.

Clinging to a one-run lead, Kevin Powers, the RFT's mound mainstay, faced the heart of the Grady's order in the bottom of the ninth. After the leadoff batter got safely aboard, KP deftly nibbled at the corners of the plate and forced a groundout, bringing the opposition's ringer to the plate as the go-ahead run. He popped out uncharacteristically weakly.

And when the next batter sliced a line drive down the left-field line, Chad Garrison chased it down for a game-ending running grab.

The win moves RFT to 4-4 on the season -- good enough for a second-place tie in the four-team league.

Jump to comments
« Cards: Another Day, Another Bullpen…  |  RFT Softball: A Special Victory in… »