Dale Singer, formerly the online news editor for STLToday.com and one of five editors laid off from the Post-Dispatch just several weeks ago, will bring his web expertise to The Beacon. 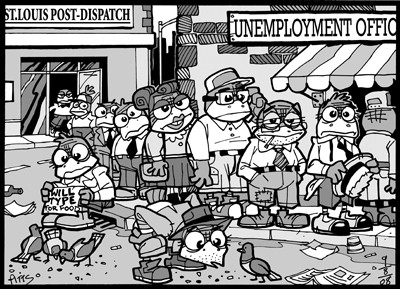 As many know, The Beacon is the web news upstart launched earlier this year by some of the Post’s Old Guard editors, many of whom took buy-outs from Lee Enterprises during the last couple years. (Funny story there: As RFT's Chad Garrison reported in this story on May 9, 2007, The Beacon initially was to be called the St. Louis Platform, in a nod to Joseph Pulitzer’s "platform" appearing in the print version of every day’s paper. Lo and behold, the Post's editorial page announced in March this year that it was creating its own new online feature, slugged, why, The Platform. Chad broke that little piece of news, too.) 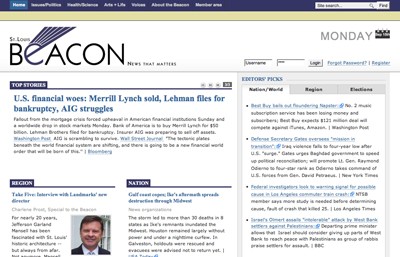 Singer toiled at the Post for almost 30 years, and before that, United Press International. Among his other credentials, says The Beacon’s associate editor Robert Duffy, Singer teaches a course in online journalism at Washington University.

No news on where any of the other Post lay-offs may land.