Just got word from Birmingham, Alabama, that St. Louisans Clayton Braun and Kerri Morgan have once again made the 18-person U.S. farm team for quad rugby. The national "murderball" team represents the U.S. at major world tournaments, including the Paralympics. 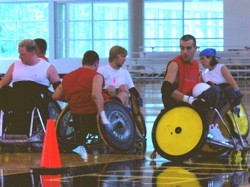 Both Braun and Morgan, who play for the St. Louis Rugby Rams, are hoping to make the last round of cuts, next May or June, in order to play for the U.S. at a world tournament next fall.

Morgan, who competed in track at the Paralympics in Beijing this past summer, was the subject of an RFT feature, "Ready to Rumble," in January 2007.

Braun also figured in that piece. His mother explains his injury here.