A story by Heather Ratcliffe in Thursday's St. Louis Post-Dispatch reports that federal authorities have indicted two Kansas Citians for running a prostitution business out of the U.S. Department of Agriculture's office in KC. The accused: Laurie Lynn McConnell, 26, and John O. Miller, 36.

According to the indictment against both, they ran two online prostitution businesses, called Darc Phoenix and USA Honies, from McConnell's computer at the USDA. Authorities allege that they placed advertisements on numerous websites and in newspapers, including the Riverfront Times in St. Louis and the Kansas City Pitch.

McConnell and Miller hired women from St. Louis, Kansas City and Tennessee to work as prostitutes in Missouri, Illinois and Kansas, according to court documents,


A story in Wednesday's Kansas City Star notes that the indictment was handed down by a St. Louis grand jury.

More details (one is a tad NSFW) after the jump.

Justin Kendall at Unreal's KC sister paper The Pitch, beat us to the story. Justin tracked down a DarcPhoenix MySpace page that's been inactive since mid-December, when the indictment was handed down. (The case was sealed until yesterday.)

Here's a link where you can download the U.S. Atty.'s press release about the indictment.

Unreal tried, to no avail, to dredge up some of the actual ads that allegedly sullied RFT pages.

But with the help of our favorite excellent Internet sleuthing tool, the WayBackMachine, we did manage to turn this up: 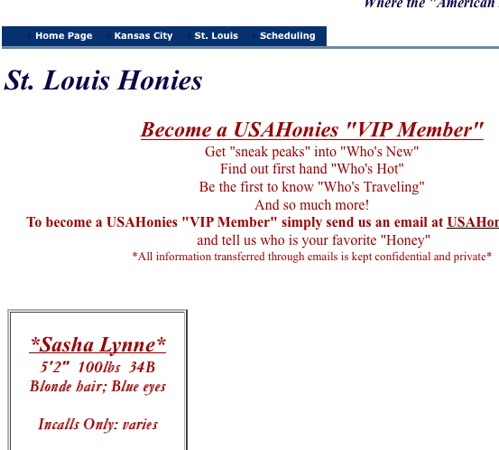 ...a version of which apparently ran online in backpage.com, our parent corp. Village Voice Media's answer to craigslist's classifieds.