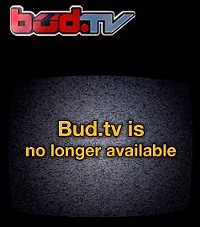 Have you heard the news? Anheuser-Busch's entertainment Web site, Bud.TV, is finito. The company switched it off yesterday.

Today the site features only the placeholder to the left accompanied by a short message thanking the millions of viewers who've logged into the site over the past two years.

The brewery never took us up on our suggestions and, well, look at 'em now.