Our river city might play second fiddle to Memphis when it comes to barbecue, and the Delmar Loop might not offer the bluesy, boozy embrace of Beale Street, but when it comes to God-friendliness, St. Louis is now entitled to bragging rights. 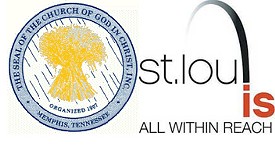 God, that is, as in Church of God in Christ, a Memphis-based Pentacostalist denomination that, after 100-plus years in Memphis, is moving next year's annual convocation a few hundred miles upriver from its own hometown.

Next year it's on to St. Louis, which made a better offer, COGIC leaders said.

Brandon Porter of COGIC said the group didn't feel Memphis was "fair" in its dealings.

"It's the lack of fair accommodations," he said. "The delegates are still not getting the kind of concessions that other cities are offering a convention of our size, as relates to hotel costs, fees waived for convention halls and so forth."

Memphis officials told Callahan that the city stands to lose upward of $35 million in revenue annually.