Things got scary for a little while there with Adam Wainwright, I have to admit. It wasn't just that he was struggling, it was the way that he was struggling. He was all over the place, and when he did manage to throw a strike, it got whacked all over the yard. Wainwright didn't even look like the same pitcher that we've all come to know and love seeing take the mound.
In fact, to be honest, it got so bad there for a while that I actually started contemplating the I Word with Adam. You know, the one that we seem to use constantly with 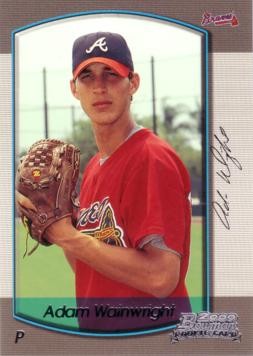 Luckily, that doesn't seem to be the case. Wainwright, at least for the moment, doesn't look as if he's hiding an injury. Just ask the Chicago Cubs. They'll tell you.
It now appears that Chris Carpenter was completely, totally, 100% on the money when he told Wainwright that his arm slot was up too high; in the two starts since making the mechanical adjustment, Wainwright has thrown 16.2 innings. He's given up two runs, seven hits, walked three, and struck out fourteen. Now that's the sort of performance we're used to seeing from Adam Wainwright.
So welcome back, Adam. I already used that video from "Welcome Back, Kotter," the other day when Carp was making his return from the DL, so I hate to put it up again. So just be content in knowing that you got your very own Card of the Week. After all, it is one of the highest honors a baseball player can receive. Or so I'm told.

Jump to comments
« University City Next Stop For Misso…  |  Baseball Card of the Week: Adam Wai… »