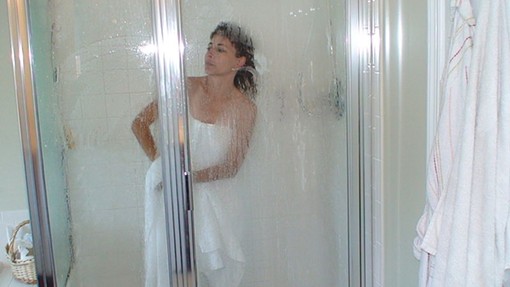 For any of you with "only three arms," or an alter-ego who lived in Ancient Greece, for that matter, check out the $19.95 Wearable Towel, patent pending worldwide.

Got this press release today...way too good not to pass along. The bolded stuff is RFT emphasis.

Indeed, this may seem quite familiar as you might recall "The Blanket with Sleeves" that took Americans by storm this winter, but with the summer heat headed our way, these blankets are all being put away. This however is not the end of the wearable craze; in fact it has just begun because now there's a towel you can wear!

At first glance, it looks like a towel and well, it is! But it's also so much more. The Wearable Towel consists only of three arm openings which are placed along the side of the towel. While the concept in and of itself seems so simple, it has never been seen before.

"We simply made the towel better," said Zoni Stein, President and CEO of 20/20 Vision Management, whose creative thinking manifested this brainchild.

If you haven't yet seen their direct response TV ad (which surprisingly is not cheesy at all) or received a twitter tweet about this revolutionary phenomenon, then you're in for a surprise and not just any surprise because this surprise is going to make your everyday life that much better!

The World Wide Web is raving with reviews ranging from comparatives like "It's not just a bathrobe worn backwards" to "I hate myself for loving you." But our favorite is "Sorry, guys. The Internet is over. There is a wearable towel now" which was written by John Biggs, of CrunchGear.com.

"While the obvious goal for us was to improve the towel, the most challenging part was warding off all the 'Big Players' in the direct response business that tried to convince us to 'up-sell' the buyer with garbage they didn't want or need," said Jonathan Benitah, Chief Operating Officer of Wearable Towel, Inc. "If that wasn't bad enough, they pitched us on ways to offer a low price to attract the customer, and then showed us ways to get the customer to pay ten times that amount. But that's just not the way we were raised, so we set out to make the entire experience better. Now when people call, they can place an order in three minutes. Our caller ID captures their address so they don't have to key-punch it in. We don't try to sell them anything extra and there are no unpleasant surprises when they get their credit card bill."

"We didn't want to leave anyone out, so we made five sizes. But I would have to say that the most important part of all is that when the Wearable Towel arrives at their doorstep, the first thing they will notice is that the quality is the same as a top-of-the-line conventional towel that they would buy in a department store for upwards of $40.00"

Speaking of Press Release Of The Day