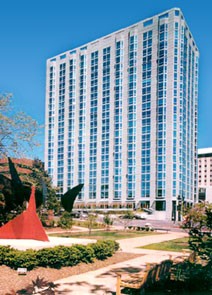 The 23-story high-rise in downtown Clayton has been many things in its brief nine-year existence.

Clayton on the Park at the corners of Brentwood Boulevard and Bonhomme Avenue, began as a boutique hotel and apartment building catering to the city's well-heeled visitors and wealthy residents. Monthly rent started at $1,300 and rose quickly from there. Adding to its panache, the building offered concierge service to all occupants and imported a London taxicab to ferry its guests to and from Clayton restaurants and the airport.

And, for a time, the hotel seemed to be doing well -- becoming known as "Heartbreak Hotel" for all the separated playboys and blue-blooded divorcees rumored to be holed up in the glass tower with sweeping views of downtown Clayton and Shaw Park.

Heartbreak, though, is what the hotel has offered its investors, especially the building's developer, Bob Saur of Conrad Properties.

After the hotel/apartment model failed to fully take off, Conrad Properties teamed last year with Sunrise Senior Living to turn the building into a high-end residential building for the elderly. In so doing, they booted the jazz club Finale out of the building's ground floor. (Finale owner Steve Schankman said then that he hoped to find a new home for his club. To date, though, that hasn't happened.)

Then, yesterday, Sauer announced that the sour economy has caused Sunrise to pull out of the building. This after completing a $10-million renovation of the building last fall to accommodate its new clientele. The last residents will move out of the building this August and it remains to be determined what will become of the Clayton on the Park.

In hindsight, perhaps the son of former Cardinals president Mark Lamping understood the best use for the building. The Lampings were residents of Clayton on the Park back in 2006 when then 17-year-old Timothy Lamping discovered that the hotel's rooftop made an excellent launching pad for throwing bottles into the Shaw Park aquatic center across the street.

Timothy Lamping was later arrested for the act and publicly apologized for his actions.

Any other ideas for the building? Section 8 housing, perhaps?