To this point in the 2009 season, the Cardinal bullpen has been one of the most consistent strengths for Tony La Russa's squad. The offense was brilliant early, then fell apart completely at the seams. The starting rotation has been mostly strong, but injuries and less than sterling performances from Todd Wellemeyer, as well as Adam Wainwright's struggles to find consistency, have led to the occasional adventure. But the relief pitching has been remarkably strong, even with the frustrations over the 'pen composition.
What has already been a strength just got a whole lot stronger. Josh Kinney recently returned to the majors, and he brought with him something very, very special.
Josh Kinney apparently decided that, in order to not only make his way back to the big leagues but to dominate upon his return, he needed to call in the big guns.
Josh Kinney grew a mustache.
And not just any mustache, mind you, but a truly great mustache. Kinney has gone for a full Goose Gossage look, the better to carry him to great feats in the bullpen. Really, the only question at this point is whether or not Kinney's use of such a magnificent mustache is fair to the opposition. Personally, I'm not concerned with competitive balance, but I'm sure that baseball may feel obligated to look into the situation. 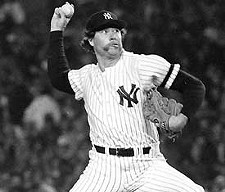 Our friends at the American Mustache Institute have done the research, after all, and have found just how large an advantage a mustache can grant to an athlete. Looking at just how good Kinney has been at certain points in his career, if you apply the performance-enhancing effects of the 'stache, and one can easily see how the Cardinals could very well be gaining an unfair advantage.
I guess we'll see how it all plays out, but for now, I think we can all agree that Josh Kinney is now the Cardinals' best reliever, and it isn't even close. With all apologies to Ryan Franklin, that fucked up Abe Lincoln looking thing he's sporting on his chin just can't hold a candle.

Speaking of The Rundown, Cardinals