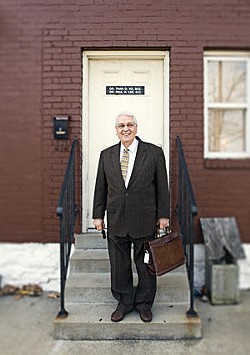 Just two months ago, the low-cost immigrant healthcare center La Clinica closed its doors owing to lack of funding.
Now Acción Social Comunitaria, a local nonprofit that offers a broad array of social services for low-income minority groups, is "on hold" after William Chignoli, the organization's founder and executive director, resigned from his leadership position last week.
Chignoli, who was profiled in an RFT feature story in March, founded ASC in 1993 while studying to become an ordained Methodist minister at Eden Theological Seminary in Webster Groves. The organization began as a means of providing mental health care, clothing and food to impoverished Latino immigrants. Since then services have expanded to include in-home meals for the elderly, vaccinations, after-school tutoring for Hispanic children, bilingual parent training and case management.
In an e-mail to Riverfront Times, Chignoli writes that he left ASC because of its recent financial struggles, which culminated with a decision last month by the organization's board of directors to cancel a fundraiser he had planned that was to be hosted by NPR and Fox News correspondent Juan Williams (emphasis added):

"After 16 years, I decided to submit my resignation. It is a bitter-sweet ending for me, but I feel proud of what I did accomplish throughout these years.

The last two years were very difficult, not only for our Organization, but for many other not-for-profit organizations as well. ASC had serious financial difficulties. There was a lack of donated funds and the loss of specific grants. The immigration situation with the Hispanic Community also created a fear reaction in those who usually supported ASC. The scheduled Williams presentation did not achieve the expected financial support, thus the Board decided to cancel it for this reason. It was at this point, after several months of uncertainty that I thought it would be better to create a new vision for ASC and so I presented my resignation to the Board [effective July 1.]"

This is not the first time the 70-year-old Chignoli has resigned from a leadership role after a spat with his organization's board of directors.
Chignoli also founded La Clinica (which was housed in Scruggs Memorial United Methodist Church, just west of South Grand Boulevard, where Chignoli still occasionally leads Sunday services) as an offshoot of ASC in 1996. He resigned as director of the clinic in 2005 after several disputes with La Clinica's board of directors, particularly their resistance to his attempts to turn the volunteer-driven healthcare facility into a Federally Qualified Health Center.
Leadership quarrels aside, Chignoli has led an impressive and accomplished life. He holds a degree in medicine from the University of Rome and was a part of the World Health Organization's initial response to the HIV/AIDS epidemic in the 1980s. More recently, in 2006 he partnered ASC with the University of Oklahoma and several state departments of education to help revamp the ESOL curriculum for public schools across the Midwest. Last November Chignoli traveled to the Seattle home of Bill and Melinda Gates to attend a conference that shaped the Gates Foundation's strategy to improve college readiness of underprivileged children.
(It was at the Gates conference that Chignoli met Juan Williams and developed the plans for the ill-fated ASC fundraiser.)
Now that he's retired, Chignoli tells RFT, he is focusing on getting his personal affairs in order, his work as a minister, and his future.
"Basically, I am waiting to know what God has in store for me," Chignoli writes. "I have been contacted by an editorial house interested in developing themes of relevance for Hispanic pastors in the USA. Friends and volunteers that were collaborators have suggested that one could consider the possibility of becoming a consultant in matters related to the Hispanic Community."
As for Acción Social, Rafael Nun, the president of the ASC's board of directors, said in a brief phone conversation that the organization is "open but on hold" as it reorganizes and moves its headquarters from offices on Manchester Road in Brentwood to Iowa Avenue in St. Louis.

Nun says the agency has stopped seeing patients during this time. He declines to comment on who might fill Chignoli's post of executive director.
"The organization will keep going," Nun says. "But Dr. Chignoli is no longer with us."

Acción Social's main phone line is disconnected. Other members of ASC's board of directors either declined to comment or did not respond to calls and e-mails seeking comment.