Party Drug or Positive Dieting? The Cacophony Over Raw Cacao 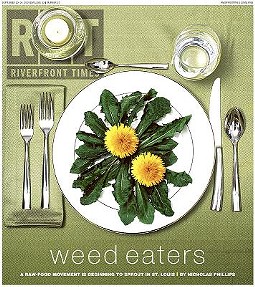 This week's cover story spotlights the weird world of St. Louis' raw vegans -- those who eat no animal products, nor anything that's been heated above about 120 degrees.

The Internets are filled with raw gurus who sometimes quibble. Take the recent spat at a New York City raw convention between Matt Monarch (who looks like a gritty, surfer-Jesus) and Paul Nison (who talks with a meaty Brooklyn accent).

(Perhaps "meaty" is not the best adjective in this context.)

The YouTube video below captures their argument, which was over raw cacao, a.k.a. raw chocolate. Nison believes raw cacao is a poisonous party drug. Monarch disagrees, suggesting that if somebody's addicted to coffee, raw cacao is a good substitute.

Nison counters that switching from coffee to raw cacao is akin to a heroin addict switching to methadone (i.e., you're swapping one poison for another).

The online debate following this video "absolutely crazy," according to Monarch. So he put out this response video, in which he throws out a "raw food advanced curveball." He claims that "all food is damaging to the body, even raw foods."

Was somebody on raw cacao when he filmed this?

Jump to comments
« Richard Nixon: That First "Liberal"…  |  Hostesses for Tour of Missouri are… »