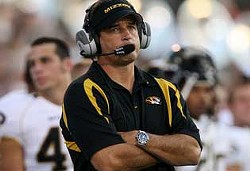 Have you heard the one about how the University of Missouri sold old cell phones belonging to football coach Gary Pinkel and basketball coach Mike Anderson?

The Columbia Tribune was the first to report last Wednesday how the coaches' phones were among some 25 old cell phones the school sold to Mike Bellman, a Columbia man who planned to cell the old phones for parts on eBay.

That was before he discovered that the university had forgotten to delete information from the phones, including text messages between Pinkel and Anderson as well as their contact lists.

The university promptly attempted to buy back the phones for the original $190 sale price and balked when Bellman demanded $1,000 (the price he believed he could get for the phone parts on eBay).

By Thursday of last week Bellman had up the price to $3,000 and said he had several sports collectors interested in the items. By the end of the week the phones were gone.

Bellman told the Columbia paper the the buyer had to sign an affidavit pledging he or she would not use information in the phones for malicious purposes.