Meet the Person Behind the Website "Kurt Greenbaum is a Pussy" 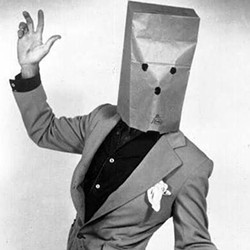 Last week Daily RFT contacted the man (or woman?) behind Kurt Greenbaum is a Pussy, a vigilante website about a certain Post-Dispatch editor who may (or may not) share similar qualities with "a vulgar expression for a part of a woman's anatomy."

The creator of kurtgreenbaumisapussy.com declined our request for a telephone interview and wouldn't provide his or her name. (Yes, who is calling whom a pussy?)

However, he/she did agree to answer some questions via email about the purpose of the site and the reaction it's received so far.

So, without further ado...

Daily RFT: We noticed that your website is registered anonymously to the hosting service Domain by Proxy. Why hide your identity?

Anonymous: Because privacy on the Internet is important. The story's not about me, it's about Kurt Greenbaum's behavior. Some people would want to parlay a site like this into fifteen minutes of fame. No, thanks. I understand that my posting anonymously may affect how some people judge the content on the site, and that's a price I pay for being anonymous. It's my ideas that have value here, not my identity. Oh, and there's a long, proud tradition of anonymity in controversial public speech, starting with Thomas Paine.

What do you hope the site accomplishes?

I hope this whole event encourages public discussion about some interesting topics:
Why do you think a website is the best way to tackle your agenda?

The First Amendment is a wonderful thing, but I probably don't need to tell you this. I wanted to contribute to the public debate about this event and maybe provide a little bit of influence on how this develops. I think of the site as a public service and it is a small way of meeting my obligations as an engaged citizen. This website was a fast, easy way to get my ideas out there.

Have you heard from Greenbaum or anyone at the Post-Dispatch?

Jump to comments
« Ten Questions in a Nightclub with K…  |  Over the Weekend: The Japandroids a… »