Behold: An Inexpensive and Engaging Use for Ballpark Village

Recently Daily RFT was made aware of a possible solution for the St. Louis Cardinals much-delayed plans for Ballpark Village.

Like the design of the new Busch Stadium, the plan harkens back to the good ol' days of baseball. Ladies and gentlemen, we submit to you the Playograph! 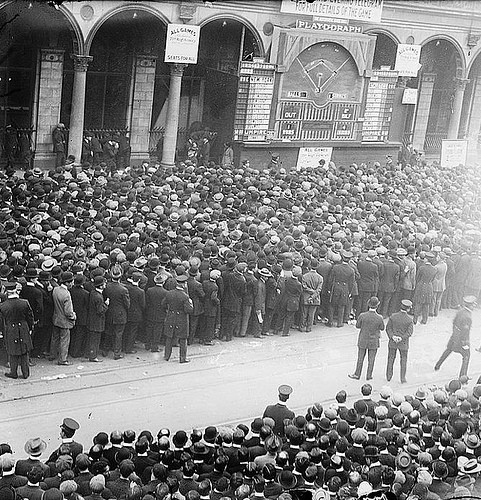 What is a Playograph, you ask?

As the website Uni Watch revealed last week, Playographs were "gigantic animatronic scoreboards, sort of like an analog version of ESPN's gamecast feature" that were assembled across the country in the early 1900s. And, as you can see from the photo above, the Playograph's really drew a crowd. (All the better for concealing big, weedy lots in the middle of a downtown.)

The Playographs worked thusly: A three-man crew inside the device would provide observers with a pitch-by-pitch account of the game occurring inside the stadium. The first person would receive an account -- via telegraph wire -- of each play. A second person inside the Playograph would operate the flight of the baseball graphic on the face of the contraption, and the third person would control all other graphics.

Yes, three employees! Just think of it: a single Playograph would increase employment in Ballpark Village by 300 percent.