This November, if a group called Missourians for the Protection of Dogs gets its way, Missouri voters will have a chance to vote on the Puppy Mill Cruelty Prevention Act. The Act proposes to curb the worst abuses in high-volume commercial dog breeding operations, known as puppy mills. 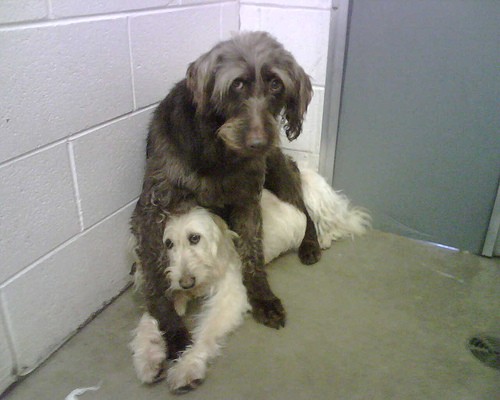 Animal rights groups, including the one Riverfront Times profiled last winter, have described the conditions of these puppy mills in graphic details. Dogs are crowded into tiny cages, with barely enough room to turn around. The cleaning schedule is irregular, to put it mildly, as is veterinary care. Female dogs spend most of their lives pregnant.

Missouri leads the country in its number of licensed USDA dog and cat breeders: Of the 5,000 nationwide, 1,525 are here. The USDA has standards, but activists say they are not nearly stringent enough.

The Puppy Mill Cruelty Prevention Act will require breeders to provide these measures for their dogs:
In addition, the Act will limit each facility to 50 breeding dogs, to prevent overcrowding.

These requirements aren't much different from those set forth by the Missouri Department of Agriculture. (To see all the state's animal facility care regulations, go here.) But now the care of dogs in kennels will be mandated by law.

For the Act to get on the Missouri ballot, Missourians for the Protection of Dogs will have to collect 100,000 signatures.

"Missouri citizens are not proud of the reputation the state has earned as 'puppy mill capital of the United States' and they want to see the laws strengthened," said Ginger Steinmetz, executive director of the MO Alliance for Animal Legislation, in a press release. "The improved standards of care described in this measure will mean less suffering for thousands of adult breeding dogs which currently spend their entire lives in wire cages. As the leading puppy-producing state, Missouri should also lead the nation when it comes to the conditions under which puppies are bred for sale in pet stores throughout the nation and the world."