Blago to Compete on Next Celebrity Apprentice

It's been years since "You're fired!", accompanied by a cobra-like flick of Donald Trump's right hand, became a national catchphrase, so long, in fact, that Trump has resorted to casting celebrities instead of regular old celebrity-whores on his reality show The Apprentice.

But now we may have a reason to watch the next season of Celebrity Apprentice, which commences March 14. Former Illinois governor Rod Blagojevich is one of the chosen fourteen contestants who will be competing for glory and charity money. 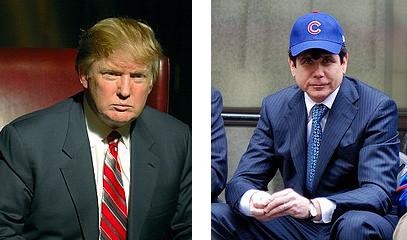 Though Blago could maybe use a job with Trump, seeing as the Illinois legislature cut him loose last year, though not with a phrase as succinct as "You're fired". His attempt to compete on the show I'm a Celebrity...Get Me Out of Here! ended in failure, as participation in taping in Costa Rica would violate the terms of his parole. (He sent his f-bomb-dropping wife Patti in his stead.) He has, however, had mild success as an Elvis impersonator.

"It's a wilderness period for me," Blagojevich confided to the Associated Press in an attempt to make himself sound noble. "But sometimes real opportunities develop in your life's journey that you can't really see when you're facing tumultuous times and the kind of storm that I'm facing."

(Well, hey, at least it looks like he may be laying off the Kipling.)

If Blago wins, the Children's Cancer Center gets $1 million. So does rooting against Rod make you a bad person?

In any case, the sight of Blagojevich's coif beside Trump's famous toupee should be quite something. Particularly if they go outside on a windy day.