Bear of a Man Served as Missouri Town's Top Cop and Scoutmaster ... Until Yesterday 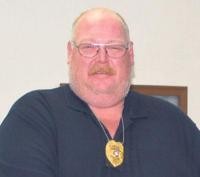 It's the talk of the town down in Fredericktown, Missouri, a two-hour drive south of St. Louis. As the local paper, Daily Journal, reports, people in diners and barbershops don't know what to make of the news yesterday that the city's police captain, Kenneth D. Tomlinson, 42, has been charged with having sex with the boys under his care as scoutmaster for Boy Scout Troop 27.

"They ought to string him up," says a man at a local restaurant.

"Very concerning ... an embarrassment," responds the shocked owner of a beauty shop.

He's accused of having "deviate sexual intercourse" with three boys under the age of 17, 14 and 12. All the acts occurred after March 2009 with the boys telling authorities that most incidents happened in Tomlinson's truck with the scout leader giving them naked pictures of girls.

Tomlinson, described as being 6-foot-two and weighing north of 400 pounds, has no prior criminal record. He's being held on a $100,000 cash-only bond. If convicted, he could face life in prison.

Yesterday's arrest comes on the heels of another area scout leader -- albeit a woman -- charged last month with having sex with a Boy Scout.

Jump to comments
« At Least One Group In Town Is Excit…  |  Stand Off Continues at North St. Lo… »