More Pictures of Antarctica and Poems by Ron Smith

It's unfortunate that we don't have enough space in our dead-tree edition to publish more photos and poetry by the subject of this week's feature, "Poetry in a Cold Climate: Ron Smith found his muse in Antarctica's vast icy wilderness."

Smith is a colonel in the Air Force who, during his twelve-year posting in Antarctica, produced several hundred poems. 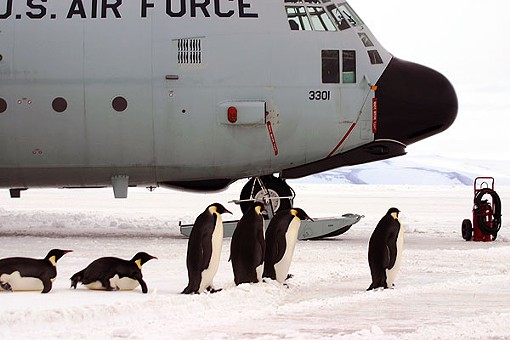 Fortunately, space online, as in Antarctica, is nearly infinite. (Or at least appears so.) Here are a few more of Smith's poems and photos. You can find even more -- including some about places other than Antarctica -- on Smith's website.

a wilderness-weir
amassed in light--
unsullied science of
neutrino-nothings
to beacon cosmos;
its chalice before me,
beauty's chaste
beatitude,
so beyond,
so benumbed,
so before
me.

Breath of the Arctic,
deep cold respires monsoon,
albino baboon of absolute winter,
primal mythos of Man,
abandoned like boulders
raked through alleys of ice,
carnage of granite valley
strewn by retreat
of a wild heartbeat, a
thump-in-the-chest wonder of
tundra, the herd, and wildflower;
that bastes seal on endless,
effortless ice-fields that pleat
the feet of concrete land,

as snows slope softly,
so oft lying like a skull, the Arctic
affrighted like a gull that flies
and cries into the sun,
senescent and small;

an iceless aquadome
that loam regrets, forgets the
priceless fjords of frigid ore,
olden saga ringing the
steeple walls of its soul, whetted
by panorama; for cruise ships
and news clips to stallion
with words.

Bear of the Coldest Ocean

romance with the rape of deep cold; to kill
recall of its ice-sweet and ghostly song,
raspy death-voice of dinosaur ice is tragic.
Reach of mythical might, circumpolar bear
reels like a unicorn on lost frontier; sea
rhythm of his wild heart is flawed and lonely.

Spirit-Inuit ambles and furry-frames a lonely
stark life, consumes its red-blooded kill;
sacrifice on the ice is seized from the sea;
so beats Arctic rhythm of no warm song.
Solar heat baits for pelt of a hunter-bear;
seals a hot fate until caged and tragic,

As life that loses its lust becomes tragic,
aching to roam the region of the lonely.
Anywhere wilderness hunts with a pale bear
aligns natural law--a creed not to kill
an ancient king who quickens that solo song,
a paw-thumping rhythm over a thick sea.

Many wonder why the ice forgot the sea,
manic ice trickles retreat to gush what is tragic.
Menacing rhythm of beauty would nobly kill
Man's madness, before ice's vice-like song;
many are the winds that will find it lonely--
meandering frost-blast for scent of omega-bear.

A rhythm of glacial ages raised Nanuq, the bear;
acclimatized a kingdom; divined crystalline sea.
And we, for one last magnificence to kill,
ritually gore the cold ivory of centuries for tragic
alms--ceremoniously make the core of life lonely,
allow powder-blue palaces to melt with ice-song,

Just as we shrivel to kill what we cannot bear,
Orphans search rhythm for song upon frozen sea,
Rising from song so tragic; melody of ice, lonely.