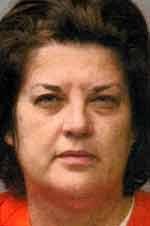 A former Daily RFT "Ass Clown of the Week" contestant has been sentenced for taking out student loans in her daughters' names to support her gambling addiction.

Cynthia Tiemann, 50, of St. Peters mother was sentenced to five years in prison yesterday. In September Tiemann pleaded guilty to forging the signature of her 72-year-old mother as a co-signer of the loans made out to Tiemann's two college-aged daughters.

Instead of using the loans for their intended purpose, Tiemann used the money for gambling. All told she blew $140,000 on her habit.

On the bright side, her actions did serve to educate her children.

They now know not to be gambling criminal like their mother. 'Cause, you know, it just doesn't pay in the end.