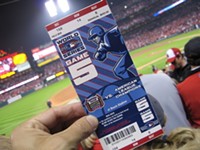 Back in December, St. Louis Circuit Court Judge Philip Heagney ordered the St. Louis Metropolitan Police Department to let the sun shine on the Internal Affairs investigative file involving police officers' use of World Series tickets that were confiscated from scalpers during the 2006 ball game.

It was a win for John Chasnoff, a gadfly who filed a civil lawsuit against the police department after it refused to turn over documents. And for the St. Louis Post-Dispatch's Jeremy Kohler and yours truly; we were also refused access to the file from the beginning.

But the police department continues to refuse to turn over the file. Moreover, the department's recent court filings suggest that the cops may have intentionally hidden information from St. Louis Circuit Attorney Jennifer Joyce when they asked her to consider issuing criminal charges.

According to court papers, the cops who were questioned by an Internal Affairs detective invoked a Fifth Amendment right that permits them to answer questions about their professional conduct -- but, and here's the catch, does not allow their statements to be used in a criminal investigation.

The department is now saying that its IA office has two files on the ticket scandal: one file is "administrative," and contains the statements from the cops who invoked those Fifth Amendment rights.

The other file is "criminal," and is the file that was submitted to Circuit Attorney Joyce. This "criminal" file does not contain any of the statements provided to the IA detective as part of the lengthy "administrative" investigation.

Joyce in mid-2007 decided not to arrest any of the officers for improper use of the tickets. If she had seen the "administrative" investigation, would she have filed criminal charges?

The department says it is now more than happy to turn over the "criminal" file to Chasnoff. But it wants to keep the "administrative" file sealed, noting in a court filing that the cops' statements are "too sensitive to be disclosed without further protection."

Tony Rothert, an ACLU lawyer who represents Chasnoff in the case, says he's now even more curious to see both files. "If the Internal Affairs division is using [Fifth Amendment rights] improperly, as a pretext to keep prosecutors from even knowing about criminal conduct with police officers, that's a problem the public needs to know about. This is exactly the kind of information the Sunshine Law was designed to let us find out about."

Judge Heagney will hold a hearing on the matter Monday morning.