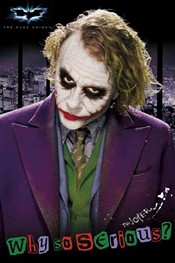 Sucks to be Robert Henderson. Investigators reportedly followed the Grandview man into a Lee's Summit movie theater in July 2008, watched as he slid a camcorder out of his winter parka -- yes, a parka in July (doh!) -- and proceeded to catch him taping The Dark Knight.

Fast-forward to February 22, 2010: Henderson appeared yesterday in U.S. District Court in Kansas City to hear his fate in the bootlegging case. And it was ugly. Ugly like Heath Ledger-as-The-Joker-scary ugly.

U.S. District Judge Gernando Gaitan sentenced Henderson to 24 months in jail and ordered him to pay a $24,738 fine.

The feds had seized 1,240 bootlegged copies of The Dark Knight from Henderson before arresting him, which prompted the Motion Picture Association of America, to calculate that 1,240 moviegoers would have spent $24,738 to see the flick in the theaters.

Not exactly beer money, OK. Unless you're Warner Bros., which has grossed more than $1 billion worldwide on Ledger's ugly mug.

What would The Joker think?