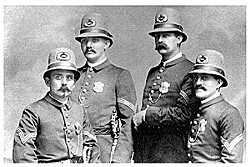 One down, one to go.

A bill that would turn oversight of the St. Louis Metropolitan Police Department to city officials cleared a contentious committee meeting yesterday in the Missouri House.

The legislation still has another committee hearing before it's introduced to the House floor. Meanwhile, a similar bill in the Senate gets its first hearing today.

"This was clearly pushed through by the chairman...I don't think he allowed ample time for both sides...it's infuriating...there's no reassurance for the police officers right now, the way this bill is written," Joe Steiger of the St. Louis Police Officer's Association told St. Louis Public Radio.