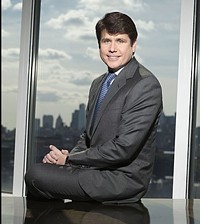 Some people who believe they are falsely accused of heinous crimes decide to prove their innocence in court. Other people go on TV reality shows. So two days after Rod Blagojevich's lawyers requested that his court date be postponed from June until November, the former Illinois governor and inadvertent stand-up comedian made his debut on Donald Trump's Celebrity Apprentice.

"I've been wronged," Blago told the camera during his introduction, "and I've come on the show to avenge myself." Trump himself told the governor he had guts, but some of his teammates were skeptical.

"I'm honored to be here with [Olympic track star] Michael Johnson," said wrestler Goldberg, "but not Rod Blagojevich." "He's the elephant in the room," agreed comedian Sinbad. "He must have information the rest of the world doesn't have to put himself out there like that."

The premise of Celebrity Apprentice is simple: Fourteen players divided evenly into teams of men and women, compete in a series of business tasks to raise money for the charities of their choice. (Blago's charity remains a mystery.) Each week, Trump "fires" one member from the losing team.

This week's task was to run a diner. The men took over a location of the New York chain Burger Heaven in Midtown Manhattan and called in their richest friends to stop by and order $100 burgers, prepared by team member and celebrity chef Curtis Stone.

Blago was assigned waiter duty. It made him feel connected to the common man, he proclaimed, another form of public service. The customers addressed him as "Gov." (Whether it was from affection or because "Blagojevich" is something of a mouthful remains unclear.) But one customer was not impressed, last season's winner Joan Rivers, who Trump sent out to visit both diners and report on which was better.

After schmoozing with Rivers, Blago got distracted by two other anonymous customers. While he chatted them up, explaining how he was personally responsible for the Chicago Cubs' back-to-back playoff appearances "and then they threw me out of office", Rivers' burger sat on the counter nearly ten minutes until Stone delivered it to her himself.

"If he runs a state the way he runs a diner, people will be waiting forever for him to commute their death sentences," Rivers complained, apparently unaware that Blago had eliminated the death penalty in the state of Illinois.

When Trump asked Blagojevich if Rivers's burger had gotten cold because he was talking about his "trials and tribulations", the former governor reverted to weaselly politician mode. "Possibly," he said. "I don't recall."

In the end, Blago's negligence as a waiter proved irrelevant. The men's team won. While the women stayed in the board room, Blago joined his teammates in the men's "war room" to watch the carnage on closed-caption TV. He sat on the couch and awkwardly exchanged high-fives and fist-bumps with Sinbad and Johnson.

"You seem to be watching this really intently, Rod," Johnson observed. Blago did not reply.

Comedian and friend-of-Seinfeld Carol Leifer got fired. Blago lives to fight another day. Do you know what this means, people of Illinois? Leifer's the one who's guilty of selling Senate seats! Rod Blagojevich is innocent!

Former O'Fallon resident Darryl Strawberry also appeared on the show, but failed to embarrass himself.