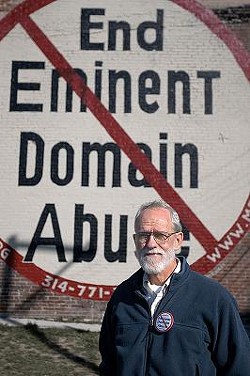 The U.S. District Court of Eastern Missouri today ruled in favor of St. Louis City in a suit over a well-known sign south of downtown.

In 2007 activist Jim Roos painted a mural on the side of a building with the message: "End Eminent Domain Abuse."

At the time, the building was one of two dozen structures owned by Roos's non-profit agency, Sanctuary in the Ordinary, that the city had slated for eminent domain.

In today's ruling, the court upheld the decision of the city's Division of Building and Inspection (B&I) to deny a permit to the sign.

Roos's attorney, meanwhile, blasted the court's decision and vowed to appeal the ruling.

"Today's decision is a blow to the right of ordinary citizens to stand up to their government when it abuses its power," said Michael Bindas, a staff attorney with the Virginia-based Institute for Justice (IJ), which represents Roos in his challenge to the city's sign code.

Roos's saga with the city began a decade ago when St. Louis and its agencies began using eminent domain to take homes that his non-profit agency uses to house the poor.

Fed up with the city's actions, Roos had the sign painted on the side of one of his buildings in March 2007. Weeks after the mural was completed, Division of Building and Inspection (B&I) cited Roos for violating the city's sign code.

The following information per Institute of Justice, which has been aiding Roos in his legal battles with the city:

According to B&I, Roos needed a permit from the city before he could protest its abuse of the eminent domain power. Roos promptly applied for a permit, which, not surprisingly, was denied by B&I and, separately, by the Land Clearance for Redevelopment Authority (LCRA)--the city agency that was threatening to use eminent domain.

Represented by IJ along with local attorney John Randall, Roos filed a pair of constitutional lawsuits in the U.S. District Court for Eastern District of Missouri challenging the permit denials by B&I and LCRA. The court dismissed Roos's case against the LCRA, but that decision was quickly overturned by the U.S. Court of Appeals for the Eighth Circuit, which found that the LCRA had no power over Roos's mural. The LCRA and Roos later settled that case when the LCRA issued a written apology to Roos for interfering with the city's consideration of his permit.

Today's ruling came in the case challenging B&I's permit denial. The district court upheld the denial and the provisions of the city's sign code under which B&I acted.

Amazingly, Roos's mural would have been perfectly legal if, instead of protesting the city's eminent domain policies, it contained a flag; a fraternal, professional or civic symbol or crest; or if the city deemed it a "work of art." In other words, a mural of the same size, in the same location, containing the Masonic crest, Papal coat of arms, or American Bar Association symbol would have been perfectly fine. According to the court, the city could allow such signs while restricting Roos's mural because "civic crests, works of art and flags are not the 'stuff' of public debate."

"The court's decision gets it precisely backwards," added Bindas. "The Supreme Court has made clear that political speech like Jim's gets the utmost constitutional protection precisely because it is the stuff of public debate."

"For Americans of limited means, signs are often the most important, if not the only, means of effective public protest," said William Maurer, an attorney with IJ. "Today's decision shuts down the most effective means of protest for those harmed by the government's abuse of eminent domain, leaving the ability to protest to only those who can afford to use TV, radio or billboards. But these are precisely the types of people who are not often targeted by the city of St. Louis for eminent domain abuse."

IJ and Roos plan to appeal the court's decision to the U.S. Court of Appeals for the Eighth Circuit.