Walt Jocketty and the Reds' Renaissance 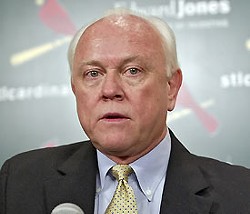 The Cincinnati Reds welcome the Cardinals into town this weekend for what is, to this point, probably the biggest series of the season for both clubs. The series in Philadelphia was the one I had been looking to as the big test for the Cards early on, but situations have changed.

Suddenly our boys in red find themselves in a dogfight for possession of first place. The Reds come in having won five games in a row; the Cardinals just got swept by Houston. Clearly these are two teams moving in different directions.
I'll admit it: I didn't buy the Reds as a legitimate threat at the beginning of the season.

I would contend, though, it isn't my fault. Rather, I, like so many others, have become desensitized to the idea of the Reds as contenders. After all, we've heard it every spring for god only knows how many years now; this is the year the Reds make some serious noise. And every season, their pennant chase fails to really materialize.
But this year, they really do look like they're for real. And the man receiving most of the credit is a familiar one to us: the Cincinnati General Manager, Walt Jocketty.
I can only be thankful the Cardinals themselves are doing well, and John Mozeliak seems to be holding his own as a GM, because otherwise I'm sure I would lose my mind listening to the narrative of Jocketty's genius and the mistake the Cards made by letting him go. I've heard hints of that narrative anyhow on sports talk radio here and there, talk of the amazing job Jocketty has done turning around the fortunes of the formerly moribund Cincinnati franchise. I've even heard it suggested this is somehow vindication for Jocketty's Way; the implication, of course, being a condemnation of the Cardinals' desire to go the build-from-within (read: cheap), route to success.
The problem with that narrative is that it's complete and utter crap.
The team which Jocketty has supposedly turned around was put together almost entirely by his predecessor, Wayne Krivsky, and it was done in the exact way Jocketty seemed unwilling to embrace in St. Louis: through the farm system.
With the exception of Scott Rolen, virtually all the players currently doing the heavy lifting in Cincinnati were brought on during Krivsky's tenure. Joey Votto, their remarkable first baseman, was drafted all the way back in 2002. Drew Stubbs and Jay Bruce were both drafted in 2005, right around the time Jocketty was patting himself on the back for his newest left-handed acquisition. Krivsky made the deal for Brandon Phillips the same spring the Cardinals were trying to decide if Junior Spivey was still a viable option. Bronson Arroyo was another Krivsky acquisition, though that one is more of a mixed bag, I admit. Johnny Cueto was a product of the farm system, signed long before Jocketty got into town.
Even Francisco Cordero, the team's closer, was a Krivsky acquisition, albeit one the Reds paid far, far too much for. So when I hear this trumped-up narrative about how Walt Jocketty has come in and turned around the Reds' fortunes, it just absolutely drives me up a wall.
Now, I should give credit where credit is due, and so I will. Jocketty has had the good sense to keep his hands mostly off and let the young players in the Reds' system develop properly. He hasn't traded away any of their good young players to try and shore up immediate holes with short-term help. The Reds' front office has been very patient with Homer Bailey, looking at his still-considerable potential rather than his less-than-impressive results, and they deserve plenty of praise there. If Bailey does end up becoming the pitcher he was long projected to be, Jocketty and the rest of the Reds' organization should receive plenty of credit, as it would have been all too easy to give up on Bailey as just one more guy who couldn't translate his minor league success to the majors.
Jocketty has also done a nice job shoring up the Reds' bullpen overall. Relief pitching for Cincinnati has long been their Achilles' Heel (remember that bizarre run of deals in 2006), but that's no longer the case. So, again, credit.
Overall, though, Jocketty's biggest skill in Cincinnati has been good timing. He showed up just as the efforts of Wayne Krivsky and the scouting department were beginning to bear fruit, and has had the good sense not to mess with a good thing too much. Don't get me wrong; not doing too much is a skill, too; one that many never develop. (Tony La Russa, anyone?) But suggesting Walt Jocketty has once again worked his magic in Cincy and the Cardinals somehow goofed letting him walk away is just asinine, and I want you all to call out anyone and everyone you hear even hint at such a thing.
In the meantime, I think we should all take comfort in the knowledge there is absolutely no chance Jaime Garcia is going to be traded for Mark Mulder any time soon.