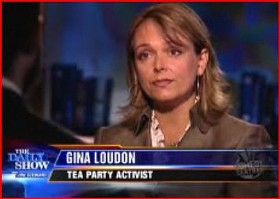 From the uber-conservative local lady that brought you the Buycott of Whole Foods last fall (then went on The Daily Show with Jon Stewart to chat about it):

The St. Louis Tea Party's Gina Loudon is showing solidarity with Arizonans and their controversial new immigration law (a.k.a., SB 1070) by urging folks across America to buy goods and services coming out of the Grand Canyon State.

It's a move meant to counteract the recent boycott of Arizona called for by the pro-immigration-rights camp, an economic sanction that the mayor of Phoenix says has caused a "near economic crisis" for his city.


likely has generated "hundreds of thousands of dollars," in spending for the companies involved, but said she hadn't yet had a chance to count the receipts she's been sent. "The numbers are probably astounding, as soon as I have time to add them up," she said.

To confuse matters, Gustavo Arellano, our newspaper chain's "Ask a Mexican" columnist, is also encouraging an Arizona buycott, but for businesses he considers pro-immigrant-rights, such as the Tuscon Weekly and our sister paper, Phoenix New Times.

Last September, Loudon organized a different buycott of Whole Foods, after that company's CEO John Mackey penned an op-ed in The Wall Street Journal that warned against government intrusion in our health care system (and totally freaked out progressives in the process). The Daily Show's Wyatt Cenac pilloried both sides in the segment linked here.