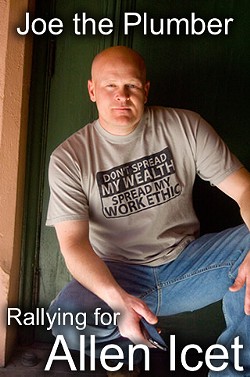 So, how is Samuel "Joe" Wurzelbacher a.k.a. "Joe the Plumber" spending his free time these days?

By stumping for Allen Icet, a Republican candidate for Missouri auditor, naturally.

Sure, it's not as noteworthy as back in 2008 when Wurzelbacher became the face of the McCain/Palin presidential campaign for questioning Barack Obama about his economic policies. But you've really got to credit Wurzelbacher for capitalizing on his 15 minutes of fame, which by my calculations expired about 777,600 minutes ago.

Still one does wonder: Why would the man running for state auditor -- a job that requires him to uphold the state's financial and accounting regulations -- want a man known for not paying his taxes and not being a licensed plumber?

Oh well, I'm sure Icet has an explanation. Joe the Plumber will speak on Icet's behalf tomorrow at Queeny Park. Tickets for tomorrow's rally can be purchased for a mere $21.