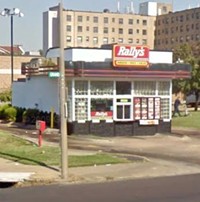 Man, been a rough couple days for St. Louis area Rally's. On Monday two would be robbers were shot up by their intended victim at a south city Rally's. Then yesterday 28-year-old Dekayla Small died from injuries outside a north city location of the fast-food restaurant.

According to police, Small was running from a man on a bicycle around 2:50 a.m. Wednesday morning when she entered the street and was struck by a vehicle. The driver then lost control of the vehicle and slammed into a Rally's at 3605 N. Grand.

Small, of the 500 block of Eiler, was rushed to the hospital with serious injuries to her legs and has since died from her injuries. Police say they have strong leads on the bicyclist who pedaled away from the scene.

The driver of the Dodge Intrepid was taken to the hospital for head injuries and is in stable condition.