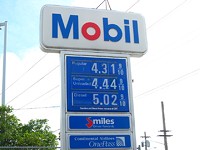 Running on empty in southern Illinois? You might want to avoid filling up at the Mobil station on Kingshighway in Washington Park.

After yet another homicide in the gritty East St. Louis suburb, the village's police chief told the Belleville News-Democrat that police "always start or end up at the Mobil when there are shootings."

Moore, from O'Fallon, Illinois, got carjacked and shot in the chest late Wednesday night. He was last spotted at the Mobil station and the cops found his late model Toyota Camry a few hours later set on fire.


[Police Chief Dave] Clark said there have been a number of shootings near the Mobil station that is also a convenience store. Asked what police are doing about the shootings around the gas station, Clark said: "We're working with Illinois State Police to see if we can do some kind of comparison of the shootings that have occurred in that area. It appears that the shootings all fit the same pattern. But, we have to definitely determine this aspect. Yes, though, it appears the shooters seem to target patrons at that location."

And you thought BP was deadly...