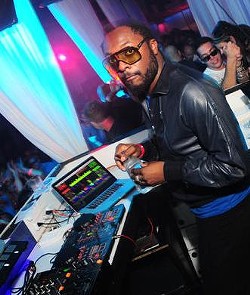 Nick Trupiano, co-owner of Lure Nightclub, says his Washington Avenue establishment is ending its "Red Hot" Thursdays promotions -- a hip-hop night that has drawn complaints from residents and scrutiny from city officials.

"It's impossible to fight the city," says Trupiano. "It's a never-ending battle."

Lure was slated to have a liquor-license hearing this afternoon. The meeting has now been pushed back to next Friday. Kara Bowlin, spokeswoman for Mayor Francis Slay, says the meeting was postponed to give Judge Margaret Walsh time to get caught up on the case after liquor commissioner Bob Kraiberg recused himself last week.

Last month one of Kraiberg's agents was indicted for soliciting bribes from Trupiano and his sister, Aprille Trupiano, in regards to another nightclub the siblings own in Soulard.

Bowlin says that the postponement of the meeting does not mean that the city and Lure are coming to an agreement. She said Lure's plans to end its Thursday night promotion doesn't change the fact that the city plans to proceed with its hearing.

In a letter to Lure dated July 28 the city accused Lure of having improper employees and blamed its patrons for three acts of violence occurring near Lure on Thursday nights or early Friday mornings dating back to last November. Those complaints include a June 11 report in which people in a nearby parking lot allegedly fired an assault rifle at police.

Just last night another fight broke out outside Lure.

Trupiano says last night's melee involved two women who were ushered out of his club by security and then got into a fight on the sidewalk that was quickly broken up by police. St. Louis police confirm that no arrests were made as a result of that incident.

"We handled that just like we should have and the police were able to intervene quickly," said Trupiano. "It's funny how whenever something happens at our club it makes the news, but when someone gets thrown through a window at a club -- which happened last week down the street -- it doesn't make the news."

Trupiano says the decision to end Red-Hot Thursday has been in the works for a couple weeks, with last night's event billed as "This Is It" in a nod to the ending. That said, Trupiano says the club will continue to host hip-hop and rap shows in the future but needs to re-evaluate its Thursday night plan.

Last month, Lure's management posted signs on its window alleging racism and accusing the city of only cracking down on it because of its Thursday night promotions that cater to African-American crowds.