Need to Stay Alert? Starve Yourself

Have you ever noticed that Jack Bauer never stopped to eat or sleep on the TV show 24? You may have spent the past few years feeling terribly inferior to this paragon who never needed to succumb to basic human needs. But now scientists in Paul Shaw's sleep lab at Washington University have proven that you, too, can become as superhuman as Bauer.

It turns out that if you starve yourself, your body will become so absorbed in hunting down nutrients, it will forget about its need to sleep.

OK, so maybe that's kind of a drastic solution, admits Matt Thimgan, a postdoctoral research assistant who worked on the study. "Obviously starvation has drastic consequences, but it could work in the short term," he says. "But I don't recommend it as a strategy."

But what is this mysterious link between starvation and superhuman sleeplessness?

Like many scientific experiments, it all comes back to a, shall we say, less complex species, in this case, fruit flies.

In the course of some other experiments, Thimgan and his fellow scientists noticed some interesting behavior in fruit flies. "Starvation had the drastic effect of causing the flies to wake up. We thought that was interesting. We checked if the waking up was followed by a sleep rebound. But they didn't have to make up the sleep."

The scientists began a series of microray experiments, that is, tracking the changes in the flies' behavior against physiological changes on the molecular level. By following the production of proteins in the flies' cells, they traced the starvation/lack of sleep connection back to a gene called Lipid storage droplet 2, or LSD2.

"We knew from other people's work that not enough sleep will affect other metabolic functions," says Thimgan. "It will lead to an increase in BMI, or obesity, or an increase in insulin sensitivity that could turn into diabetes. One big consequence of sleep deprivation is a learning deficit, it makes it harder to learn. Everyone knows that."

But when the LSD2 gene was disabled in one group of fruit flies, via starvation, and the flies were deprived of sleep, they still continued to score high on alertness tests (in this case, teaching the flies to associate light with Something Bad, and also measuring an enzyme in their saliva). In the end, the flies managed to last 28 hours without sleep, nearly three times longer than average, before succumbing to the inevitable: death.

Thimgan believes that disabling LSD2 makes it harder for brain cells to hold on to lipids, or fatty molecules, which impairs the brain's usual response to sleep deprivation. 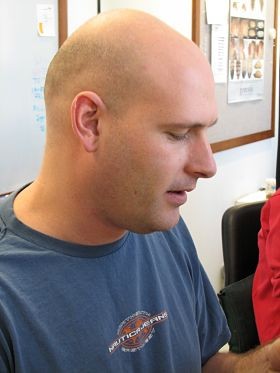 "From an evolutionary perspective, this makes sense," Thimgan said in a press release. "If you're starving, you want to make sure you're on the top of your game cognitively, to improve your chances of finding food rather than becoming food for someone else."

Alas, practical applications for this study for humans lie in the future. Thimgan hopes that someday scientists will be able to create a supplement that mimics the effects of starvation on the LSD2 gene without people having to, you know, starve themselves.

"We have a five-month-old," he says. "It would be nice to have some type of supplement to get you through the day when you haven't slept a lot."