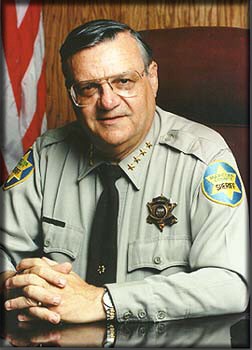 The Department of Justice today filed a lawsuit alleging that Arizona lawman Joe Arpaio is blocking its investigation into possible civil rights violations within his Maricopa County Sheriff's Department.

Arpaio is well known in Arizona -- and increasingly nationwide -- for his sweeps allegedly designed to round up illegal immigrants and for stunts like forcing prisoners to work in chain gangs, live in tent cities and wear pink uniforms.

In a news release today, the Justice Department described Arpaio's refusal to turn over information "unprecedented" with DOJ officials unaware of any other police department or sheriff's office refusing to cooperate with it in the last 30 years.

Arpaio, meanwhile, has called the suit "camouflage" because the government has no case.

In May, Arpaio reached out across state lines to lend his support to Missouri congressional candidate Ed Martin, who he described as being a strong-willed man such as himself.

"I applaud Ed Martin for taking a strong stand against illegal immigration," said Arpaio. "We need people like Ed who understand the importance of protecting our country. Too many politicians would prefer to skate around the issues especially if they might be controversial. We need representatives who will say what they mean, and do what they say. I'm for Ed Martin because he obviously will confront issues head on and not hide behind any bureaucratic red tape."

Daily RFT this afternoon left a message with Martin's campaign to see what -- if anything -- they thought about the lawsuit. On his Twitter feed, Martin seems unfazed -- or unaware -- of the lawsuit with his latest tweet warning how Mexican drug gangs control southern Arizona.

Jump to comments
« This Land Was Made for You and Me..…  |  Scouting the Rams' Wide Receivers »