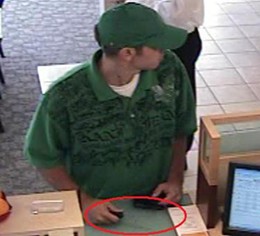 The FBI and local law enforcement is on the lookout for a man who robbed a PNC Bank in Des Peres yesterday. The robbery occurred around 10:30 a.m. in the 12100 of Manchester Road.

According to authorities, the robber -- a white male standing around 6 feet tall and weighing 180 pounds -- entered the handed a note to the teller and pulled out a weapon described as a steak knife. The man then ran from the building wearing a green polo shirt, green ball cap and baggy blue jeans.

More photos after the jump, including images of the bandit running off with a handful of cash.

Anyone with information on the suspect is asked to call Crime Stoppers at 866-371-TIPS.