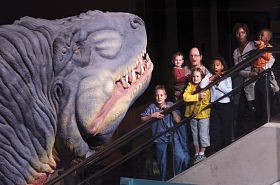 Doug King, director of the Saint Louis Science Center since 1995, is on his way out. And, no, his leaving has nothing to do with the misplacement of a pile of Native American artifacts lent to the museum by a St. Louis family.

King has accepted a position as director of the Museum of Flight in Seattle. He starts his new job January 1, 2011.

"The Museum of Flight is a wonderful professional opportunity for Doug, whose life-long passion is flight, and we wish him the best in his new endeavor," said Ted Hellman, chairman of the Science Center Board of Commissioners, in a press release.

During King's fifteen-year tenure at the science center, the museum grew into a major draw, taking in 1.2 million visitors annually and $15 million in revenue. But there were also charges of mismanagement from employees, including the disposal in 2001 of hundreds of files pertaining to the museum's collections.

Currently, a lawsuit is ongoing between the science center and the Airis family, who, in 1974, lent the science center 47 Native American artifacts collected by the patriarch, Thomas Airis, in the 1940s and 50s. Thirty-six of those objects remain unaccounted for. For more, check out the Riverfront Times feature, "The Case of the Missing Eagle Feathers."