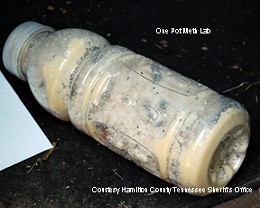 It's looking like 2010 will mark the 10th consecutive year that Missouri leads the nation in the number meth labs confiscated by police.

As the Southeast Missourian reports today, Missouri law enforcement has seized more than 1,400 meth labs through September -- an 8 percent increase over the same point last year. At this pace, Missouri police could bust more than 2,000 meth labs by year's end.

Contributing to the increase numbers is the growing popularity of so-called "shake and bake" labs that allow meth cooks to manufacture the drug on the run. Once again, Jefferson County has reported the most number of busts this year -- 153 through September.