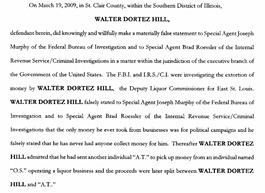 Walter Hill, East St. Louis' disgraced deputy liquor commissioner, was sentenced to five years in federal prison last Friday after he pleaded guilty earlier this year to extorting money, alcohol and sex from several of the city's business owners. Hill also admitted to lying to the FBI during their investigation of the case.

District Court Judge Michael Reagan handed down the sentence with the requirement that the 32-year-old Hill serve a minimum of 51 months. Hill was also fined $2,500 and ordered to pay $1,020 in restitution, $500 of which will go to Omar Shehadeh, the mini-mart owner turned whistle blower who helped put Hill behind bars.

Hill tried to get Shedaheh -- identified in Hill's indictment by his initials O.S. -- to pay $5,000 to keep his business open. Hill allegedly sent a "bag man," Albert C. Thompson, to pick up the cash on his behalf. Hill also tried to force Shedaheh, an undocumented immigrant, to purchase a vacant building on the East side for far more than the property was worth. Shehadeh, however, was wearing a wire for the FBI.

The Belleville News-Democrat reports that, during Hill's trial, several women testified that the Mayor Alvin Parks-appointee attempted to use his power as a city official to elicit sexual favors:

Another woman, to whom Hill must pay $500 in restitution, said the deputy liquor commissioner took several bottles of expensive liquor from behind the bar at her club and hit on her and several female employees.

As if his initial crimes weren't enough, Hill is also accused of unlawfully filing for unemployment after the city of East St. Louis voted to eliminate his position following his indictment. The BND reports that Hill lied on his unemployment paperwork and ended up receiving $32, 417 taxpayer dollars.