Wash. U. Scientists Listen to the Mind at Work on Newfangled Brain Radio 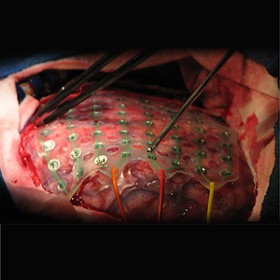 Dr. Eric Leuthardt, who works at the Washington University School of Medicine, has the coolest toys of anybody in St. Louis: first the Monteris Medical AutoLITT System, a laser-tipped wand that zaps brain tumors, and now the electrocorticograph, a grid of electrodes that can be directly implanted onto the brain's surface to monitor brain frequencies.

Think of it as a really good brain radio.

The previous model, the electroencephalograph, or EEG, placed electrodes on the scalp, which led to some interference and static when researchers tried to monitor brainwaves to figure out what, exactly, was going on in different parts of the brain. The EEG could only monitor frequencies up to 40 hertz. Electrocorticography can detect frequencies as high as 500 hertz and it can give researchers a more precise idea -- within a centimeter -- of where, exactly, the signals are coming from.

It also confirms suspicions that brainwave activity is a lot more complicated than anybody thought.

Originally, Leuthardt and his colleagues used electrocorticography to hunt for sections of patients' brains that didn't respond to anti-seizure medication and which could be removed surgically (maybe with the AutoLITT system!). But since they're scientists and smart, they realized they could, with the patients' permission, use the electrodes to monitor other brain activity as well.

So far, they've used electrocorticography to watch what happens when a person's consciousness fades under anesthesia.

But at one frequency level known as the gamma band, which is about 40 hertz, the activity level dropped dramatically as the patients lost consciousness. Scientists theorize that the gamma band is the manifestation of neurons passing information to other neurons, like associating visual images with memories, or what philosophers call "perception."

Leuthardt and his fellow researchers have also discovered that when a part of the brain is performing different functions, its frequencies change. In an experiment, they moved a single electrode around brain regions associated with speech and discovered that they could tell, just by observing the frequency of the brain waves, whether a patient had heard or seen a word, was preparing to repeat that word or was actually speaking.

A paper about this experiment will be published in the February 11 issue of The Journal of Neuroscience.